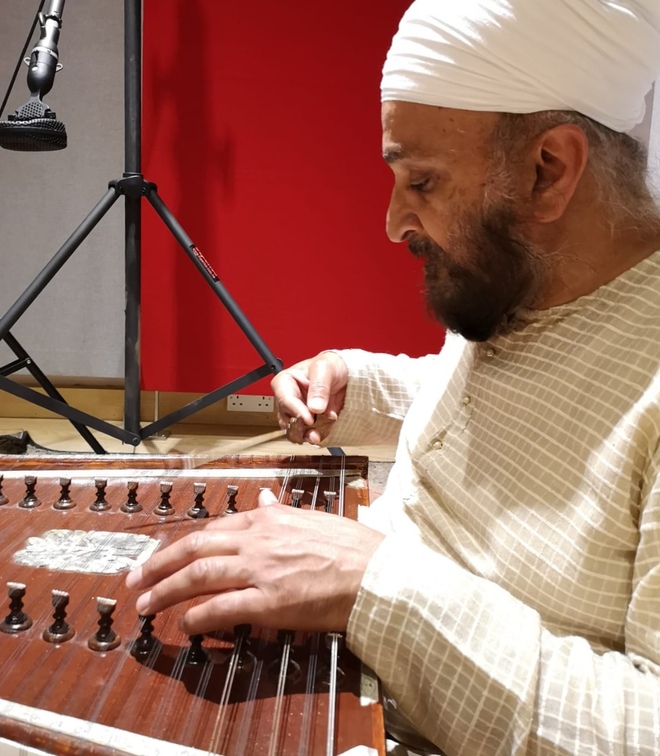 Leading santoor maestro Kiranpal Singh Deoora had been engaged in the propagation of Hindustani classical music in the West for over five decades. Born in raised in Tanzania (East Africa), Kiranpal Singh learnt the rudiments of Indian classical vocal music from his parents and got duly trained in art. Presently settled in London, he is a venerated teacher, mentor and performer of international merit. Credited with over fifteen albums of classical instrumental music, the saintly maestro is humble to the core.

The foremost disciple of santoor wizard Pandit Shiv Kumar Sharma, Kiranpal had earlier learnt the intricacies of tabla playing from Ustad Ripudhaman Singh Plaha of Punjab gharana. He owes his name, fame and successful career in music to the blessings of Satguru Jagjit Singh ji Maharaj. “It was my tabla recital in London which was graced by the holy presence of Satguru Jagjit Singh Maharaj who watched my performance, blessed me, took me under his patronage and the rest is history,” shared Kiranpal with due reverence and sense of gratitude to Satguru after his recent performance at Pracheen Kala Kendra.

Raised in traditional culture of Tanzania and educated in pop musical milieu of London, he took up towards Hindustani classical music. He explains, “Hindustani classical music has many cultural contexts. It is divine, sublime and voice of human soul.” Thanks to his music-loving parents, he grew up appreciating its melodic appeal since his childhood, which made an impassioned devotee of Indian classical and Gurbani music. “As I had submitted at the lotus feet of Satguru ji who sensing my ability and potential put me under the tutelage of santoor wizard Pandit Shiv Kumar Sharma in Bombay in 1977. I stayed at guru ji residence for over ten years and learnt the finer nuances of Santoor playing under guru-shishya tradition.”

Deoora also teaches his disciples with the same spirit. “But not all the European students are able to follow guru-shishya tradition. Many of my disciples are avid performers.” At home his son Kartar Singh plays santoor and tabla, while daughters Gurkiran Pal Kaur and Gurkirtan Kaur play santoor and dilruba with equal verve and passion. “The goras are very inquisitive to know about the structural frame up of santoor with 100 strings and formation of ragas. They take learning very seriously,” says Kiranpal who has been teaching music in schools and universities.

“No doubt the vocal music is hailed as the main expression of Hindustani art music but with western audience the instrumental music is in ascendency. May be the theme of lyrics of vocal compositions in Brajbhasha or Sanskrit, weaved around lives of our deities not in their conceptual grasp. But the melody generated by resonant tonal effects and thrilling presentation appeals more to foreign audience.”