SB Durga, the lensman for whom PM Indira Gandhi posed 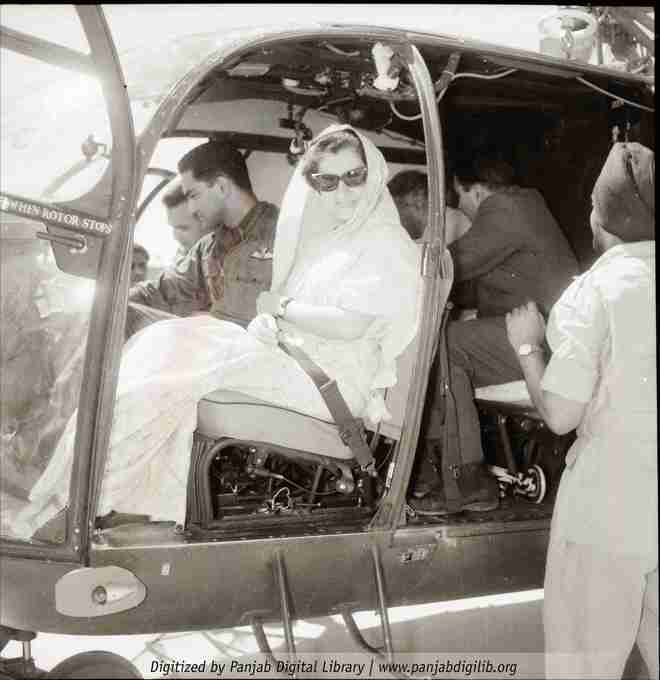 Gandhi smiles at Durga, who had just asked her toput the pallu blown away by the wind on her head.

The then Prime Minister Indira Gandhi was on her way to Shimla, boarding the helicopter, when a lanky young photographer requested her to keep the pallu of her saree on her head and pose for a picture. Gandhi obliged, smiling into the camera. When she saw the photographs later, she loved them, her office requesting for a negative. “She likes the one of her alone and wondered if it is possible to get the negative of it...” wrote Amie Crishna, her Additional Private Secretary, in a letter dated July 8, 1967. But the photographer declined. Shamsher Bahadur Durga was not the one to give in to awe; he knew that the negatives were a photographer’s only asset. And he kept them safe with him for more than 40 years, only sharing them with the Panjab Digital Library (PDL) a decade ago when it offered to archive them. He died at 91 last month.

This photograph was taken during MS Randhawa’s tenure as the Chief Commissioner of the Union Territory of Chandigarh. And Durga had been handpicked by him after seeing his work as an audio-visual aids officer with the Punjab government. “Durgaji was Randhawaji’s blue-eyed boy,” gushes his wife, Harinder.

Durga was stationed in Chandigarh after PEPSU merged with Punjab in 1956. When Randhawa came here as its Chief Commissioner, he noticed Durga’s photography and requested the Punjab government to spare him for Chandigarh for some time. He then tasked Durga with documenting the new city; the new heroes it was discovering in the likes of Milkha Singh; the new cultural and educational sites coming up — among them Chandigarh Museum and the Rose Garden, which Randhawa was instrumental in developing. Durga would accompany him on his official and unofficial tours also — extensively documenting life in Kullu valley.

Durga started out as a photographer but gradually went back to making documentary films, something he had first learnt while training in Pune under KB Godbole and the British filmmaker Herbert Marshall, who had stayed in India in the 1950s and ’60s. Needless to say, Durga went on to excel, winning a National Award for his film, ‘Sri Hem Kunt Sahib’, at the 32nd National Film Festival in 1985. He also presented his film on Sobha Singh, ‘Profile of a Painter’, at the Indian Panorama (1988) organised by the Directorate of Film Festivals. Architect and art critic SS Bhatti called him “perceptive and sensitive”. Complimenting his editing ability, he added that he had “a poetic sensibility to express his pictorial ideas in evocative visual symbols and metaphors”.

Earlier, it was under Durga that a Film and Television Division was started by Punjab’s Department of Information and Public Relations to make newsreels and documentary films. He handled the division for 17 years until his retirement in 1988. During his tenure, he directed and produced 123 newsreels, covering important events of the state. These films were screened at commercial cinema halls and mobile cinema units run by the government in urban and rural areas.

The documentary films he made are not in the possession of the family, but the photographs he clicked have been saved for posterity. While reading Randhawa’s memoir, ‘Aap Beeti’, London-based writer Amarjit Chandan realised that an important chronicler of Chandigarh and Punjab had faded from memory — of both the government and the public. He began looking for Durga, soon getting in touch with him. True to his nature, Durga had kept safe not just all the negatives, but also the cameras and bulbs he used. Chandan introduced Durga to Davinder Pal Singh from the PDL. Over 500 of his photographs have now been digitised and the equipment donated to the PDL.

Singh says Durga’s photographs include rare shots of Chandigarh during developmental stages. “These photos capture forts and miniatures of the area, as well as the scenery and architecture of the time. There is also a collection of candid and staged pictures of Randhawa with Indira Gandhi, Zakir Hussain, Balwant Gargi, Amrita Pritam, Gurbakhsh Singh Preetlari, Mulk Raj Anand, Shiv Kumar Batalvi, among others.” His favourite, however, are photographs of Qila Mubarak in Patiala. “The frescoes are in a bad shape today, but when Durga clicked them in the 1970s, they were fine. The photos will, some day, help in restoration,” he says.

For the family, what mattered most was his simplicity. “AL Fletcher, the first Vice-Chancellor of Chaudhary Charan Singh Haryana Agricultural University, wanted him to join him; Randhawa ji wanted to take him to PAU, offering to set up a camp office in Chandigarh if he wanted to be home; Giani Zail Singh wanted to take him to Delhi when he became President. But he wanted to be in Chandigarh,” Harinder remembers. Durga’s daughter, who moved in with her parents last year, has only now realised how organised he was. Every important communication, even from 50 years ago, lies in his almirah. Perhaps the quality of an ardent chronicler.