The many religious transformations of Hagia Sophia

In its 1,400-year life-span, the monument has served as a cathedral, mosque, a museum — and now a mosque again 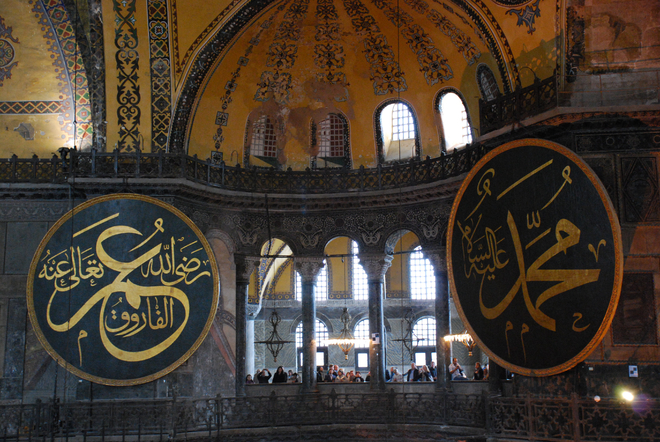 On Friday, the 10th of July, with a stroke of his pen, the Turkish President Recep Tayyip Erdogan turned the secular clock back on his country’s most famous architectural icon Hagia Sophia. He signed the official decree for reconversion of the world heritage site in Istanbul from a museum to a mosque.

In its 1,400 year life-span, it has served as a cathedral, mosque, a museum — and now a mosque again! Known for its architectural splendour it has been a cherished monument revered both by Muslims and Christians alike with highest footfalls in Turkey of drawing 3.7 million visitors last year.

Built as a cathedral by the Roman emperor Justinian I in 565 AD, Hagia Sophia stands as the greatest example of Byzantine architecture and engineering in the world. To build his cathedral, Justinian turned to two master builders, Anthemius and Isidore the Elder. But it all started much earlier than the rule of Justinian, when the Roman emperor Constantine converted to Christianity, and shifted his capital from Rome to a new eastern location of the empire called Byzantium. The change was both for reasons of defence and better accessibility to the trade routes through the safe harbour of the ‘Golden Horn’ along river Bosphorus, the slender link between the Black Sea and the Sea of Marmara. The new capital flourished with trade and built many new monuments and civic facilities, and soon began to be called Constantinople after the emperor.

After the rise of the Ottoman Empire and the conquest of Constantinople by its ruler Sultan Mehmet II in 1453, Hagia Sophia was converted into a mosque after remaining a cathedral for nearly a millennium. And three days after seizing control of the city, the Sultan held his first Friday prayers in the new mosque. However, with the end of the Ottoman Empire and evolution of Turkey into a secular republic in 1934, the monument was turned into a museum by its rulers. And in 1985 it acquired the halo of becoming a World Heritage Site inscribed by UNESCO.

Bosphorus, slicing through Istanbul, divides the historic city with dreamy domes and minarets defining its skylines, into eastern and western parts. Stepping across from one end to the other over the bridge spanning the river is to step from Asia to Europe or more tellingly from the ‘Orient to the Occidental’. Remember the great mystery novel ‘Murder on the Orient Express’ by Agatha Christie, with all action aboard the historic train that connected Paris to the gateway of Asia, Istanbul? The old relic of Sirkeci railway station, where the Orient Express chugged in from Paris, is still preserved with pristine nostalgia.

Marvel of architecture and engineering

As one approaches the majestic Hagia Sophia, its huge dome, slender, sky-soaring minarets and sturdy brick walls come into focus; viewed across the river from the western side, these are mere silhouettes. The series of domes culminating in the main cupola that crowns the large 240 feet by 270 feet nave below rises 180 feet above ground level. It remained the largest dome for nearly a 1,000 years till other cathedrals rivaled it. Four pencil-like minarets were added during the Ottoman Empire to give it the semblance of a mosque.

The engineering genius behind the huge size of the dome lies in using an ingenious technique of resting it on the four large columns by employing pendentives (triangular segments of a sphere), improving upon on the earlier devices of corbelling or squinches. Built in a speeding hurry at the behest of the emperor — not surprisingly the massive weight of the dome gave in and it had to be rebuilt on two occasions. Years later, large brick buttresses had to be added on the exteriors to support the walls from buckling under the thrust of the dome’s weight. “On the completion of Hagia Sophia, Justinian is said to have remarked: “Solomon, I have outdone thee.”

As awesome is the external form and scale of the Hagia Sophia with the rhythm of rising cupolas, the sharp, slender pointed minarets imparting it an added upward thrust; the interior contrasting it all. Quiet, sublime, full of repose, it has the ethereal ambience of divinity.

The huge volume of the nave, with two floors of galleries on the sides, approached by ramp are replete with rich decorations. Numerous decorations, mosaics, calligraphic inscriptions and roundels adorn the ceilings and walls. Notable among these are murals from Christian themes and the calligraphic roundels inscribed with holy names. In fact, one of the major concerns of the Christian clergy is the fate of such decorations now that it has been turned into a mosque.

No wonder a concern was voiced by UNESCO authorities too regarding any modifications threatening its future heritage status. “Hagia Sophia is an architectural masterpiece and a unique testimony to interactions between Europe and Asia over the centuries. Its status as a museum reflects the universal nature of its heritage, and makes it a powerful symbol for dialogue,” said Director-General Audrey Azoulay.

One hopes for the sake of universal brotherhood that the assurances by the Turkish President himself, allaying all such apprehensions, are adhered to. “Hagia Sophia, the common heritage of humanity, will go forward to embrace everyone with its new status in a much more sincere and much more unique way,” he has said. In fact, architecture has always been used for political messaging and symbolism. Hopefully, in the case of Hagia Sophia, Sancta Sophia in Latin, formerly the ‘Church of Holy Wisdom’ and now the Great Mosque of Ayasofya, holy wisdom will truly prevail.