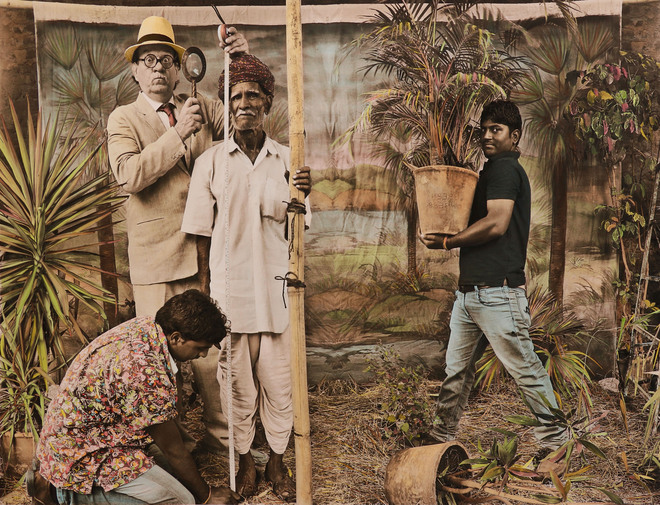 The odd one in: For his latest exhibition, Waswo has worked with long-time collaborators Rajesh Soni and Shyam Lal Kumhar, both from Rajasthan.

There is something magical about Waswo X Waswo’s painted photographs that transport one within the setting of our favourite bedtime fairytales, complete with enchanted forests, lofty mountains, rippling brooks, majestic castles and forts and overall air of suspension of belief. His latest collection of artworks are on display at Latitude 28 gallery in what is the first physical show in New Delhi since the lockdown. Entitled ‘We Are Always Working’, the artist describes it as “a show, which brings to fore the gallery as a platform for art.”

The Milwaukee-born artist travelled extensively in India, Sri Lanka and Southeast Asia for 16 years before he decided to set up his home and studio in the city of Udaipur in Rajasthan. For an artist who was always looked upon as the “white outsider” when he decided to portray himself as an “observer” of Indian cultural propensities by putting his own portraits in his photographs, the art world sat up and took notice of his ability at satire and wonderful sense of humour.

As he says, “Here I was, this fedora-clad, bumbling white tourist who was trying to get a taste of India. What fascinated me were the masses and not the royal maharajas. When I came to Delhi, I specifically told the travel agent that I did not want to visit the Taj Mahal. I looked at the map of India and pointed at Udaipur. It was love at first sight with its stunning lakes and architecture. In 2006, I shifted base.”

It was in Udaipur that he met Rajesh Soni, a young artist from Mewar. One thing led to another and Rajesh began hand painting Waswo’s photographs with colours, imbuing them with a sense of freshness and artistry. Shyam Lal Kumhar, the other artist with whom Waswo works, has also been an integral part of his studio since then.

The current exhibition is a collaborative effort between all three. It is very interesting to observe how with a sepia photograph, Waswo is able to create a tapestry of a rich narrative wherein he actually seems to be “closely studying” his subjects through telescopes and DSLR cameras or just trying to net butterflies alongside. “My models are common men and women from villages of Udaipur and it takes a fair share of planning and preparation before an actual shoot,” he says.

The exhibition is full of emotive moments and fun scenarios. In ‘She Was Unhappy With Her Portrait’, the frame is divided into two halves; in one, you see a woman looking sad and Waswo gaping in wonderment from behind. In the other half, she appears smug with a hint of a smile on the lips and no Waswo. It almost appears as if his intervention made her feel better about the image with his expertise and powers of observation.

In another work, a model with a fabulous six-pack is pouring water over himself from a matka, standing in the lake with the mountains and a fort in the background. In a miniature shot against the same backdrop, one notices Waswo enacting the same bathing scene, with complete nonchalance about his “not-so-fit” torso.

When asked about this interesting duo of works, Waswo laughs. “It is my attempt at behaving as a caricature of this awkward privileged American trying to unravel the cultural nuances that greet me at every nook and cranny of India. I draw playful references from life and love the fact that my creative process has enabled me to blend comfortably in the Indian art scenario.”

The show is a refreshing break from the seriousness and sheer mundanity of life itself.