When Indian mugdars were a sensation in US and UK 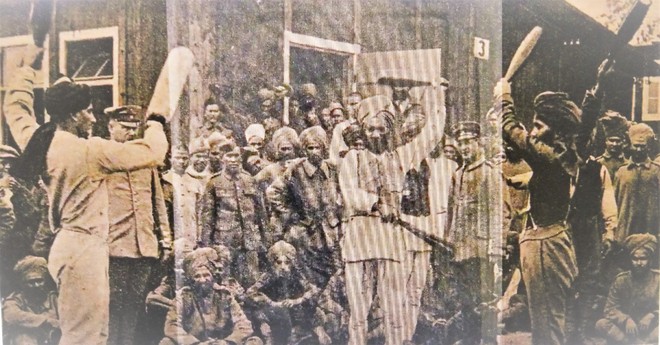 An old photograph of Indian soldiers demonstrating with Indian clubs as their officers look on.

These clubs act like an incantation. You cannot touch them, you cannot lift them for the simplest exercise, without causing strength to flow into every member of your body as naturally and irresistibly as water into the conduit... New systems of muscles seem to shoot out from your shoulder-blades, enabling you to do, almost without effort, what you could not dream of doing before.

“Neglect the body; impoverish the mind. To those, who say they have no time for exercise, we heartily recommend the Indian clubs, which, in connection with a daily walk of a few miles, will be just exactly what is required to secure physical perfection and muscular strength.”

Long before India began exporting yoga to the world, as it does today, there were Indian seasons of fitness in the United States, and they centred around those wooden clubs — mugdars as they are called at home — which wrestlers here had been exercising with for centuries. These clubs have been a part of life here, finding place even in paintings of musical modes, like the Desakhya Ragini, where while wrestlers are seen ‘with top knots of hair standing on end, long arms held back, and making resounding sounds with the slapping of body’, we see mugdars lying on the side waiting to be picked up in the next moment and whirled around in aesthetic moves. The story, however, of how these Indian clubs — as they came quickly to be named — reached those distant shores and turned, almost suddenly, into a sensation is truly fascinating.

It can be traced, as has been done by researchers, to the second quarter of the 19th century when these clubs, as an accessory of physical exercise, travelled to England from India. British Manly Exercises by Donald Walker, published in 1834, is believed to be the earliest reference book on the subject of ‘club swinging’, the mugdars, being named as ‘Indian clubs’, finding prominent mention in it. Some Englishmen in the service of the East India Company had seen the ‘graceful motions and good physiques of wrestlers swinging heavy clubs’ in India, and took them back to England while returning. Back home, where sedentary lifestyles were taking root in the wake of the industrial revolution, the need to achieve and preserve good health was being felt — as in Germany, where at this very time turnvereins had gained immense ground, the word literally meaning ‘unions or associations for gymnastics’ — and these Indian clubs became one of the tools of ‘restorative arts’ which aimed at bringing the body into an optimal state of balance, ‘compensating the effects of modern life’. The clubs, made somewhat lighter than the Indian clubs, were introduced in the British army in 1850, one reads. From a little later, there are photographs of some army officers watching Indian soldiers wielding these clubs and excercising with them.

In England, a key figure in the popularisation of ‘club swinging’ was ‘Professor Harrison’, known widely then as ‘the strongest man’ in the country. His enviable physique was proof, it was believed, that exercising with the clubs was indeed effective. Among the people who saw him — the year was 1861 — with admiration bordering on disbelief was a young man, Sim Kehoe, from the United States. He was eventualy to become the person who took the clubs, worked on their design to make them a little lighter, and turned them into a household name, while setting himself up as the ‘King of Clubs’. With typical American flair he advertised himself and his products relentlessly, featuring ‘corseted ladies and muscular athletes’ along with a caricature of himself, promoting clubs with adjustable weights. Tapping into the YMCA vein, he borrowed the name ‘Muscular Christianity’, while gaining support from men of great prominence, including the redoubtable General, Ulysses Grant. To the General, fresh from his great victory in the Civil War, Kehoe sent with his compliments a set of Indian clubs, which were graciously received. “I have the pleasure of acknowledging the receipt,” the General wrote back, “of a full set of rosewood Dumb-Bells and Indian Clubs, of your manufacture. They are of the nicest workmanship. Please accept my thanks for your thus remembering me, and particularly my boys, who I know will take great delight as well as receive benefit in using them.” With endorsements like this, Kehoe had put ‘his muscle-building clubs into the hands of the average American’. As someone who was documenting the history of the Indian clubs in America observed: “In a country that was still largely unsettled in a cultural sense, the various health promotions and fads attempted to instill a sense of moral order as well as physical.” The Civil War had just ended, and the nation was beginning to reflect about its ‘national purpose’. Without health and fitness, that purpose could not be achieved.

This extraordinary wave of enthusiasm, fed in part by the German-inspired ‘turn’ associations which were more active in some states or regions than others, lasted for several decades, but it did not last forever. For, when the times began to change, and more modern gadgets and ‘gyms’ made their appearance, the wave began to recede. In one respect, however, it had made a deep impact: women had begun to take to the exercise in large numbers because of the ease with which it could be done in privacy, away, in other words, from prying eyes. It is not that public festivals ceased to be. In fact, there is a report from the city of Cincinnati in 1909 about ‘thousands of people gathering at the Carthage Fairgrounds on the nubby dusty infield of the racetrack, to watch groups of women clad in long dresses, each holding in her hand an Indian club, ‘making a series of intricate, graceful movements, swinging the clubs up from their sides and around their bodies, crisscrossing the clubs in patterns that emphasised coordination and discipline’.

This, of course, was different from the way, much earlier, in England where suffragettes, agitating to get the right to vote, such as E Sylvia Pankhurst, carried their Indian clubs, along with long hatpins, when clashing with armed police. The clubs, it was reported, ‘proved particularly effective in getting police horses to abruptly sit down, dismounting the bobbies, and knocking off their helmets’.