When puppets convey a message

Ludhiana boy Gurpreet Singh Doel has a hobby of converting dolls into puppets and making their videos, one of which has now been selected by the I&B Ministry as it is about precautions required to check the spread of Covid-19 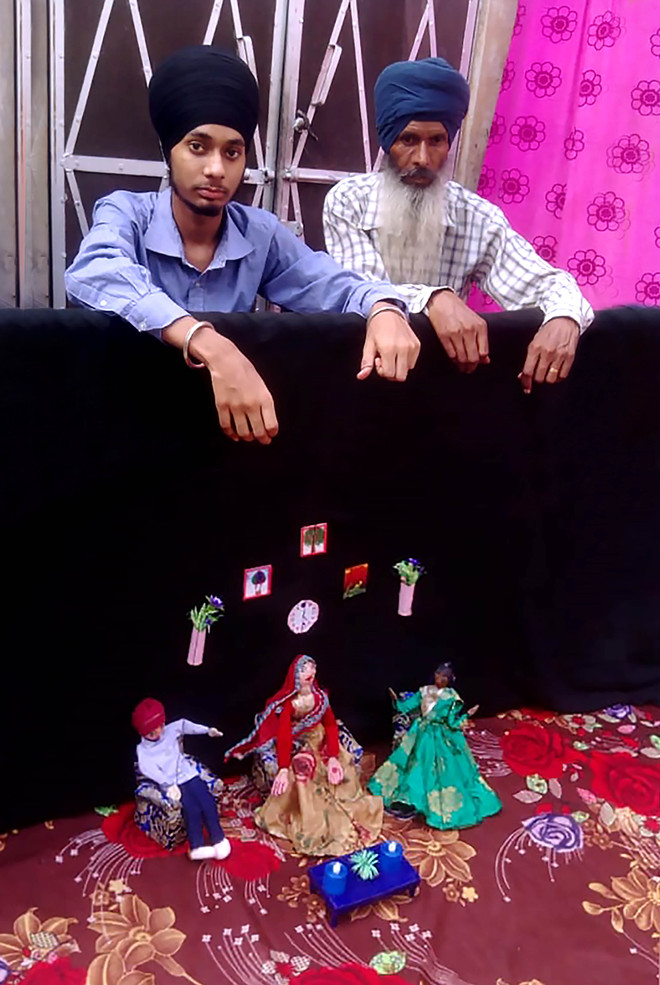 Gurpreet Singh Doel with his father

His childhood fascination of playing with the dolls of his sisters has won him accolades. In the lockdown period, Gurpreet Singh Doel (18) chose to make these dolls look more fanciful by embellishing them with designer clothes and jewellery. His efforts to convert them into puppets by tying threads, weaving stories around them, making their videos and giving a voiceover has won him several hearts.

Doel recently made a mark as his video regarding precautions required to check the spread of Covid-19 was selected by the Regional Outreach Bureau Chandigarh of the I&B Ministry. It also got widely shared on social media platforms.

This was the second time that the government authorities had chosen to pick and use his video. Another of Doel’s video, which he had made last month, to promote government school education in the state, was used by the state education department to spread across the message and give a fillip to admissions.

A Plus Two (Arts) pass-out from Shaheed Col Harcharan Singh Sekhon Government Senior Secondary School, Mullanpur Dakha, Ludhiana, Doel said the video was actually a tribute to his teachers who helped him with studies. He added that he was happy with the way the education department used it to spread across the message, as to how the government schools were using e-content, web-based activities and online education for its students in the ongoing pandemic.

“Since I hail from a family of potters, I have been using clay, pottery material and paper mache to design my characters. Since my father Baljinder Singh suffered from TB recently and is too weak to work, I learnt his art to carry it forward. My mother Sukhwinder Kaur stitches clothes and she helped me design the dresses of the puppets. Since I have a good hand in painting, I used bright colours to give facial expressions to my characters. My sister Ramandeep Kaur makes videos as I handle the threads from behind a dark wall. Later, we all form various characters to give a voiceover and complete the story,” he said. Doel added, “I want to do some live puppetry shows to earn money but because of lockdown restrictions, making videos and sharing them on social media is the only way out.”

He regretted that since his parents were not able to make ends meet, he might not be able to take admission in any college. “Things have gone worse for us. My dad cannot work and my mother is not getting any tailoring job. She has had to work as domestic help now and I do not want to put any financial strain on them. So, I will study once I have my own resources for which I have planned to take painting, art and craft and singing classes,” he said, while adding that his sisters were luckier as one of them had moved to New Zealand for higher studies two years back and the other one had completed her post-graduation here.