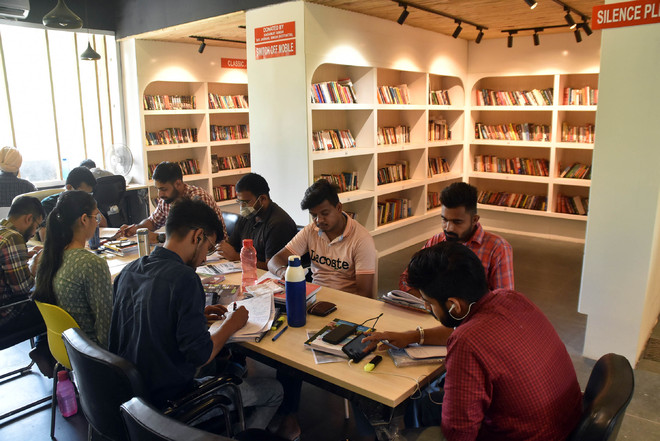 Students at a newly opened library in Bathinda.Pawan Sharma

The Bathinda district administration has planned to open 100 state-of-the-art libraries for the youth in the district at a cost of Rs 15 crore. Under this project, the first digital library has already been set up in Bathinda city at Rs 90 lakh, which is getting a good response from students.

The hi-tech air-conditioned library is a multipurpose facility equipped with all facilities concerning the users of the modern era.

The library has quality study and reference material, and competitive books as well to help students prepare for competitive exams.

Apart from books, the library has a lab with 20 computers, a recreation area, a pool table and a music room with a hi-tech piano. This is the model, on which other libraries in 100 villages would be set up in the district.

Bathinda Additional Deputy Commissioner (ADC) Paramvir Singh, who is the brainchild of this project, said: “The district administration library at the Zila Parishad office is lying defunct, so I decided to open a modern library to provide youth with a platform to get quality knowledge.”

The ADC said, “The project is aimed at rediscovering how public and academic libraries move forward and adapt to the new technologies and users’ needs.”

He said they had fixed the membership fee at Rs 500 per month to make it a self-sustainable project. At present, the library had a seating capacity of 70 as they had targeted 100 members initially, he said. “We are seeing a good response as membership number has reached 160 so far, and we have started extending the facility. A library will come up at the ground floor as well to increase its capacity,” he said. The second library at the third floor of the Zila Parishad office would have a capacity of around 200, he said.