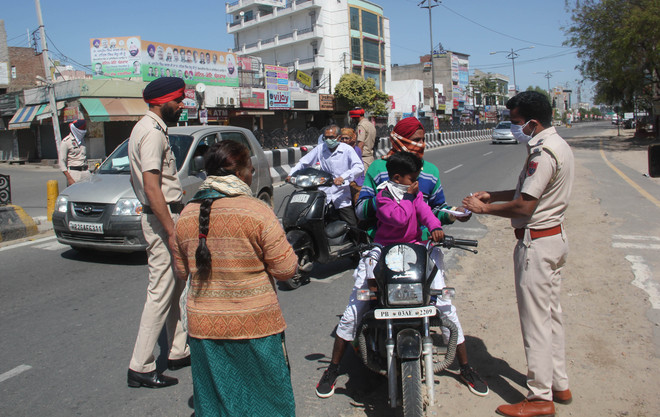 Police personnel ask a resident about the purpose of his travel in Bathinda. Photo: Pawan Sharma

The Bathinda police are continuously taking action against curfew violators in the district. On Saturday, the police booked 18 persons for curfew violations.

Kotwali police station ASI Jagdeep Singh said they were were present near Gol Diggi on Saturday, when some people were seen roaming freely on road near Nai Basti defying the district magistrate's orders. The police team reached the spot and arrested Baljinder Singh of Guru Nanakpura, Kirandeep Singh of Hazi Rattan Chowk, Kala Singh of Sanjay Nagar, Gurmeet Singh of Sanjay Nagar, Tarun Arora of Molviya Wala mohalla and Vikas Sharma of Mehna Chowk and registered a case against them.

Even Sangat police station ASI Karamjit Singh has registered a case against Niranjan Singh, Ravinder Kumar and Jagsir Singh of Jassi Baghwali for defying curfew orders. They were arrested. ASI Karamjit Singh said three accused were roaming on a motorcycle near Jassi Baghwali bus stand. They were stopped by the police, but they failed to show any curfew pass, after which a case was registered against them.

Apart from this, Phul police station has registered a case against one shopkeeper for selling items at high rates and has even arrested him. ASI Sarabjit Singh said in a complaint to the police, Lovepreet Singh of Salebrah village alleged that accused Jagsir Singh had opened his shop and was selling ration at high rates. The police conducted a raid and arrested him.