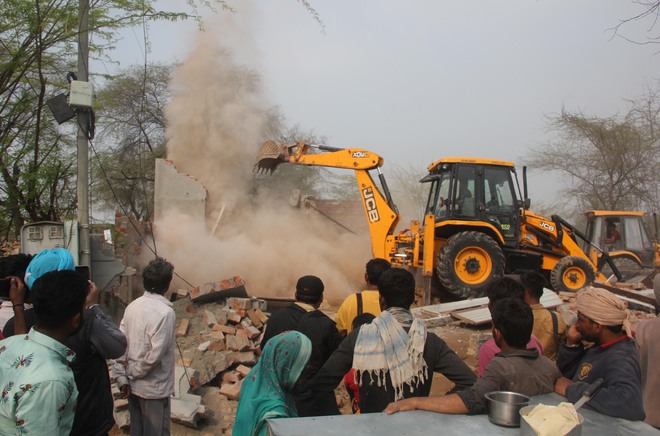 A team of officials of the Bathinda Development Authority (BDA) conducted a demolition drive and razed around 35 illegal structures constructed on PUDA land in Dhobiana Basti here on Tuesday. Residents staged a protest and raised slogans against the BDA and the state government.

When the BDA team, along with police personnel and a JCB machine, reached Dhobiana Basti, it created panic among residents there and women started raising slogans and staged a protest, but the police took them to the police station.

Tehsildar Sukhbir Brar was the Duty Magistrate during the drive and was present on the spot. The BDA team, headed by XEN Ajay Garg and SDOs Balwinder Singh and Ramesh Kumar, directed the residents to vacant the houses.

The houses of Gurtej Kaur, Kaka Singh, Makhan Singh, Roop Singh, Balwinder Kaur, Karan, Iqbal Singh and others were razed. A large number of police personnel from various police stations, along with anti-riot personnel, were also deployed on the spot.

The residents tried to stop the demolition proceedings by lying in front of the JCB machine, but police officials removed them. A protester, Iqbal Singh, said the police allegedly thrashed his sister Sandeep Kaur and his wife Bhado Kaur who was three months’ pregnant. The protesters said their houses were built 400 metres away from the ring road and this was stated by ring road officials, but BDA officials did not listen to them.

SDO Ramesh Kumar said the action against the illegal encroachments had been taken on the directions of the authorities concerned.

The affected persons questioned big landlords had made houses here and had given them on rent and why no action had been taken against them. Only poor families had been targeted. They attacked local Congress and SAD leaders, claiming during elections they came to seek votes, but in bad times nobody came and supported them.

BDA Chief Administrator Bikramjit Singh Shergill said the action had been taken against the illegal structures which had come up on the BDA land. He said the affected people were earlier issued notices, asking them to vacate the land.