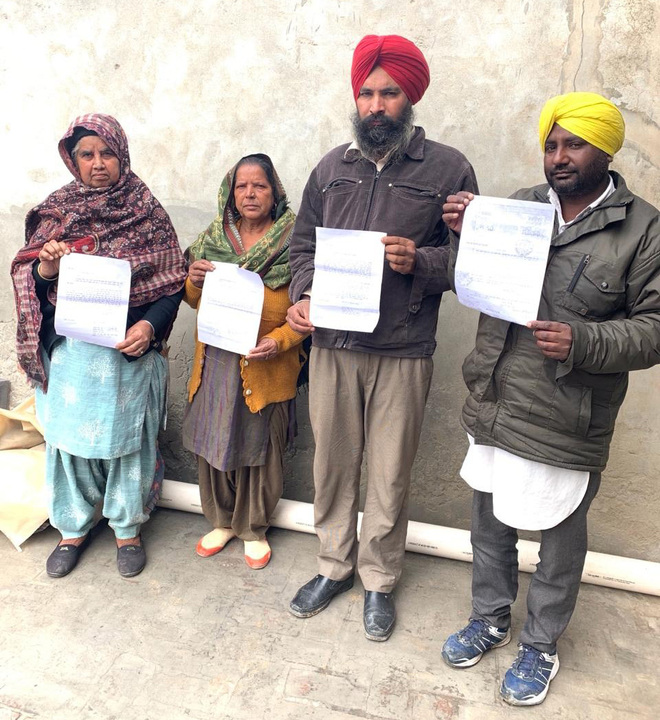 Panchayat members of Lakhi Jungle who moved a no-confidence motion against the sarpanch of the village. Tribune photo

Four of the six panchayat members of Lakhi Jungle village in Goniana block have moved a no-confidence motion against sarpanch Charanjit Kaur. The members alleged that the sarpanch was not consulting them before carrying out developmental works.

The members alleged that they were never provided any information on utilisation of grants, amounting to crores, sanctioned for developmental works to the historically significant village. They submitted a memorandum of demands to the ADC (D) and the BDPO, but to no avail, they said.

The panchayat members first raised the issue with the sarpanch but when things did not work out, they reached out to officials of the district administration. The members have also leveled allegations against Beant Singh, husband of the sarpanch, for using his wife as a “rubber stamp” while carrying out all works himself.

Panchayat members Tarsem Singh, Gurmeet Singh, Harbansh Kaur and Kulwinder Singh said apart from grants worth crores, Union Minister Harsimrat Badal also sanctioned a grant of Rs5 lakh for development of the village in January last year. Tarsem Singh said: “We have given a written submission to the ADC and the BDPO concerned but nothing has been done to resolve the issue.”

Kulwinder Singh said: “The sarpanch never bothers to consult or discuss matters concerning development of village and status of grants with us. Moreover, the sarpanch’s husband looks after every work related on behalf of his wife.”

Reportedly, the village was to be converted into ‘smart village’ under the Mahatma Gandhi Sarbat Vikas Yojana and the Chief Principal Secretary, Suresh Kumar, had inaugurated works under the scheme in November 2018. A grant of Rs10 crore was sanctioned for development of three villages, Lakhi Jungle, Nathiana and Mehma Sarja.

Lakhi Jungle village assumes historical significance as Guru Nanak Dev and other Sikh Gurus had visited the village. There is a historical gurdwara, where Sikh devotees from the region pay obeisance.

When contacted Charanjit Kaur, sarpanch of Lakhi Jungle village, said, “We are always available for developmental works of the village. One panchayat member has been misleading others for his vested interests. The member also demands money for domestic use, of which we have evidence as well. As far as developmental works of the village are concerned, if anyone finds even a single sub-standard brick used, I am ready to face consequences.”