Few battling for life; reason yet to be ascertained 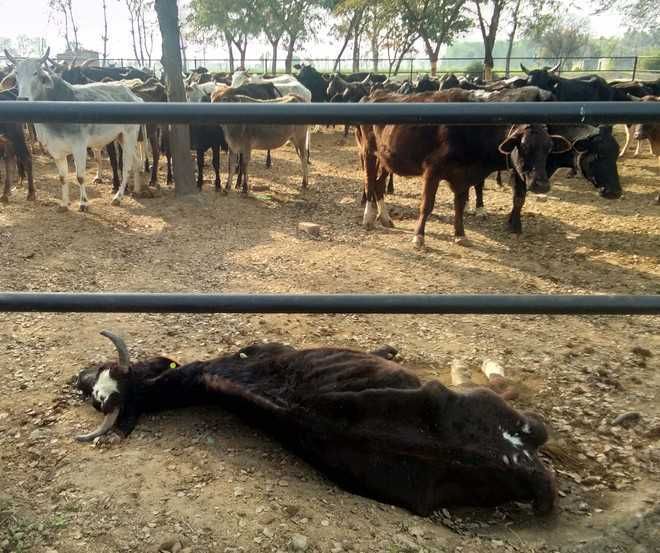 A total of eight stray cattle died in the past two days while a couple of them are still battling for life at the cattle pound situated in Harraipur village of Goniana block. While the exact cause of the death is yet to be ascertained, the manager of the cattle pound has attributed the deaths to eating filthy material such as plastic bags and cold weather conditions.

According to information, the condition of four cattle is said to be critical and at present, they are under treatment. Villagers, however, said the cold wave and poor arrangements at the pound led to the deaths of cattle.

Baljit Singh, manager, Harraipur cattle pound, said, “Eight cattle died in the past two days, while four are ill. We had informed the doctor and their treatment started on time. As of now, the exact cause of the death cannot be ascertained. There is a possibility that cattle might have died after eating polythene bags. Besides, the weather has also turned quite chilly in the past some days. Moreover, we always ensure that cattle get proper treatment after they fall sick or show a little bit of discomfort.”

Sources said adequate measures were not in place to ensure that the pound is covered properly so that cattle can be protected from the cold during the winter season. They added sides of the cattle pound are not covered properly with tarpaulin sheets, leaving a gap in between.

Surprisingly, two days have passed, carcasses of cattle were not lifted from the pound till the filing of the report. The manager of the cattle pound said they had informed the carcass lifters in Goniana and they would take these to the animal carcass dumping zone.

Several cattle at the Harraipur pound died in the past as well. There are hundreds of cattle in the pound, but there is no permanent veterinary doctor.

Ramesh Mehta, a member of a city-based NGO, said, “It is very unfortunate that so many cattle died all of a sudden. If there is anything that a social service organisation can do, the authorities must inform us. We can provide whatever it takes to protect these cattle.”