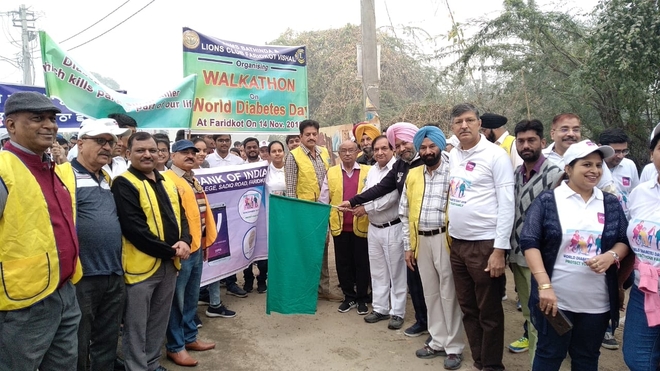 Students and faculty members participate in a walkathon, which was flagged off by Dr Raj Bahadur, Vice-Chancellor of the Baba Farid University of Health Sciences, on Thursday. Tribune photo

In order to promote awareness in the community regarding diabetes, the Department of Community and Family Medicine (CFM), AIIMS, Bathinda, organised a series of activities, such as walkathon, quiz competition and nukkad natak on World Diabetes Day in Faridkot today.

The walkathon was flagged off by BFUHS Vice Chancellor Dr Raj Bahadur. He stressed that early diagnosis and treatment were essential to prevent further complications, such as blindness, heart disease, kidney failure and early premature death in diabetic patients. He said physical exercise was must to avoid diabetes.

Dr Bhola Nath, academic in-charge, informed that the number of diabetic patients in world rose roughly four fold from 108 million in 1980 to 424 million in 2017 with current prevalence of 8.8 per cent. In India, the number of people diagnosed with diabetes is around 30 million. He also conveyed that Punjab was having a prevalence of diabetes as high as around 10 per cent.

This year's theme is Diabetes: Protect Your Family. The diabetes day campaign aims to promote advocacy and the importance of taking coordinated and concerted actions to confront diabetes as a critical global health issue. India is among one of the top five high diabetic burden countries in the world.

Apart from faculty, undergraduate MBBS students of the AIIMS, residents too participated in the walkathon to highlight the problem of diabetes.

A quiz competition was organised by Dr Soumya, which was followed by a prize distribution ceremony by Alka, SBI manager, Medical Campus, Sadiq Road, Faridkot branch.