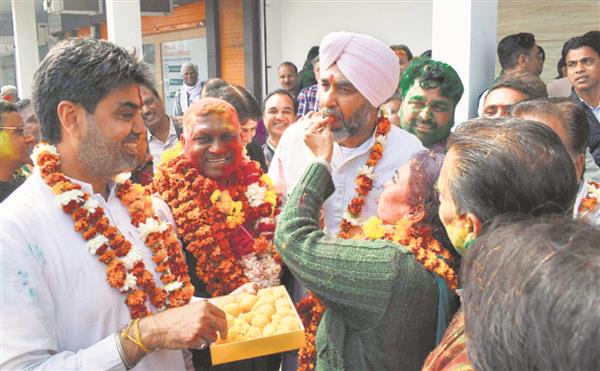 The Congress has won the Bathinda MC poll by winning 43 of the 50 wards and is all set to have its Mayor for the first time. SAD secured its win in seven wards, while the BJP and AAP failed to open its account.

In a major turnaround, PPCC secretary Tehal Singh Sandhu’s wife Manjit Kaur lost from ward No 1 with just 25 votes and even ex-deputy mayor and BJP candidate Gurinderpal Kaur Mangat lost badly with only 86 votes and remained on the fourth position.

Two candidates got the same number of 334 votes and it was a tie between AAP’s Ranbir Singh and Independent Surjit Singh. Later, the Independent was declared winner by a toss in ward No 2 of Goniana MC.

Cornered over the farm laws, the BJP performed poorly in most wards it contested in Bathinda. In ward No 24, the BJP candidate got only 22 votes out of around 3,000 polled, 61 in ward No 18 and 55 votes in ward No 21. However, BJP Bathinda urban president Vinod Kumar Binta, who contested as an Independent on tractor symbol, won by 229 votes from ward No 2 in the Bhucho MC.