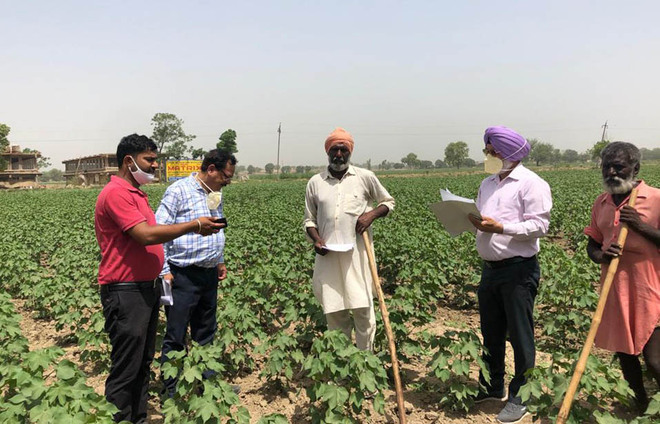 Officials inspect a field in Bathinda.

Pink bollworm attack on cotton crop has been reported in some areas in Bathinda district. Farmers are claiming damage on the cotton sown earlier.

The pink bollworm attack has been reported in Talwandi Sabo, Sangat and Rama blocks along with few villages adjoining Bathinda city.

After learning about the attack, the farmers are quite worried about the safety of their crops. They alleged they informed Agricultural Department officials about the attack but they did not pay attention to their complaint. Later, they brought the matter to the notice of Punjab Agriculture University (PAU) officials, after which a team of five experts visited the affected villages in the district on Tuesday.

Farmer Balwant Singh of Gurusar Sainiwala village said pink bollworm had started destroying cotton crops in Mehta, Jassi Baghwali, Rama Mandi, Sangat and Talwandi Sabo blocks in the district. He said as large numbers of farmers were busy in paddy cultivation, many were still unaware about the attack. PAU agriculture expert Dr Pathania said the area under attack was quite less. It had been found the attack had been reported in the fields where farmers did not take precautions like destroying crop residue.

Dr Bahadur Singh, Chief Agriculture Officer, Bathinda, said, “We are conducting a survey. We have instructed farmers to start spraying insecticides to prevent further spread of pink bollworm in the region.” — TNS