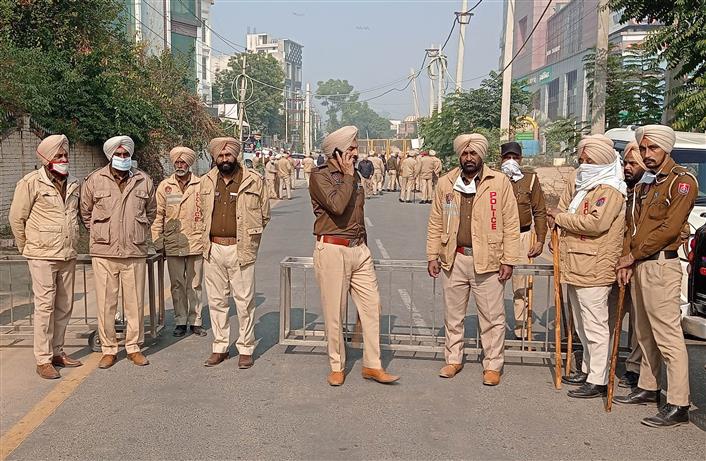 Elaborate security arrangements at the venue of the BJP state president event at Bathinda on December 26, 2020.- Tribune photo

Bathinda Police have booked 30-40 unidentified people in a recent incident of vandalism at an event held by the Bharatiya Janata Party to mark the birth anniversary of former prime minister Atal Bihar Vajpayee, sources said.

A group of people, allegedly protesting farmers, ransacked the event at Amrik Road in Bathinda on Friday.  Police registered a case on the basis of a complaint by BJP’s Bathinda president Vinod Kumar Binta.

In his complaint, Binta said farmer unions and some other organisations ransacked the event held on December 25 just before Prime Minister Narendra Modi was to address the gathering of 20-25 BJP workers. The rampaging mob that came from Mann petrol pump broke through police barricades, upturned chairs and disrupted the event. The complaint said one BJP worker it identified as Ravinder was also wounded in the incident.

The development comes as farmers’ protests against the central government’s controversial agriculture reforms escalate with no breakthrough yet despite several rounds of talks.  Farmers have agreed to another round of talks that will be held on Tuesday.

Farmers primarily fear that the laws would render the APMC, or the mandi system, weakened and would leave them open to exploitation. Another objection is the clause that allows contract farming, which they say could lead to losing their lands to big corporations. Centre disputes both claims.