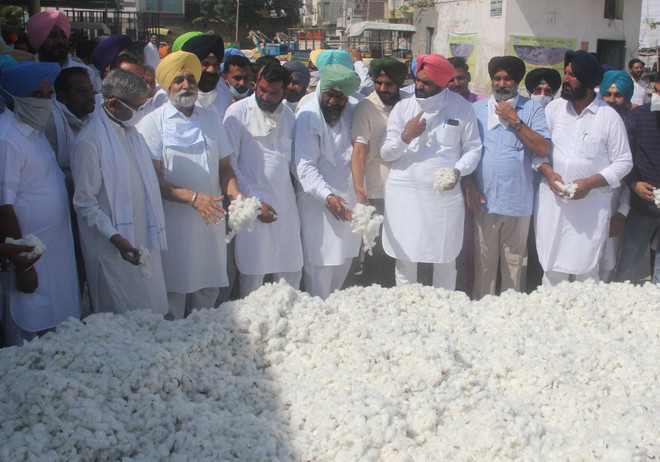 Cotton Corporation of India (CCI) today started the procurement in three markets in the district and purchased more than 200 quintals of the produce. However, the minimum support price continues to elude many farmers.

On the one hand, CCI officials wouldn't procure cotton from me. On the other, private players are quoting a very low price for the produce. — Gurcharan Singh, a farmer

“On the one hand, citing purchase guidelines, CCI officials wouldn’t procure cotton from me. On the other, private players are quoting a very low price for the produce, which is much richer in quality than that of many others in the mandi,” said Gurcharan Singh, a farmer from Kot Bhara village.

Another farmer Amandeep Singh from Katar Singh Wala village said, “The moisture content in my cotton was measured at 12 per cent. However, the price quoted was Rs 5,446 when the minimum support price (MSP) is Rs 5,725.”

Conducting procurement at the grain market in Bathinda, Harjit Singh, senior commercial officer, CCI, said: “We have procured around 200 quintals of cotton. While making the purchase, the quality of cotton, along with the moisture content, is in focus.”

Meanwhile, former senior SAD minister and Akali Dal’s Kisan wing president Sikander Singh Maluka met cotton farmers at the grain market and assured them that he would take up the matter with authorities concerned to facilitate the MSP or at least remunerative prices on their produce.

“I would also urge farmers to dry the cotton properly and ensure it’s in rich form and within the permissible limit of moisture content before bringing it to mandis for procurement,” said Maluka. He also met CCI officials and urged them to make the purchase of cotton on MSP.