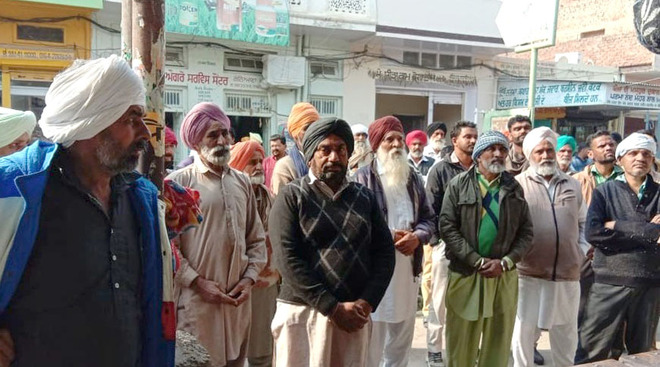 Members of the BKU (Ekta Ugrahan) after a meeting with officials of the Cotton Corporation of India at Goniana Mandi in Bathinda on Tuesday. Tribune photo

Fissures among cotton growers came to the fore as different sections of farmers adopted divergent stance regarding the procurement of cotton at Goniana mandi. While members of the Bharatiya Kisan Union (BKU) (Ekta Ugrahan) got their produce lifted through the Cotton Corporation of India (CCI) on government rates (MSP), another section of farmers chose private procurement agencies for procurement.

After a series of protests by farm union members of the region over non-procurement of cotton by the CCI, officials of the agency, at a meeting with BKU (Ekta Ugrahan) members, had recently announced that they would conduct procurement twice a week, on every Tuesday and Saturday. It was also decided that farmers would ferry their agricultural produce to the Jagdish Cotton factory in Gill Patti village, where direct procurement of cotton on government rates would be facilitated by the CCI. On Tuesday, CCI officials procured approximately 100 quintals of cotton at Goniana mandi. Procurement was also done by private procurement agencies with help from arhtiyas.

Talking to Bathinda Tribune, Amrik Singh, block president of the union, said: “We have been pushing for procurement of cotton on MSP through the CCI and after our constant struggle, when our demands were agreed to, some farmers have dragged their feet and have opted to sell their produce to private procurement agencies via arhtiyas.”

“We are against private procurement of the produce. Farmers can get good return as the CCI has given its nod to procurement on the MSP. We urge all farmers to get the procurement done through the CCI,” Singh added.

A section of farmers, who has opted to get the procurement done through private procurement agencies, said relying on arhtiyas was their compulsion as no government agency, bank or society would extend a helping hand when they would need financial assistance.

It is pertinent to mention here that earlier, when the CCI was not conducting procurement, farmers were being coerced to sell cotton for as low as Rs4,500 to Rs4,800 per quintal to private agencies. However, the MSP for cotton this year is Rs5,450 per quintal.

Restoration of statehood can calm tensions in J-K: ICG

With the fresh cases, India's Covid tally rose to 22.68 lakh

Amid stand-off with China, ITBP to purchase 358 silencer-fitted sniper rifles

Maharashtra govt to accord state funeral to Capt Deepak Sathe

The funeral of Captain Sathe, 58, who was a resident of Chan...