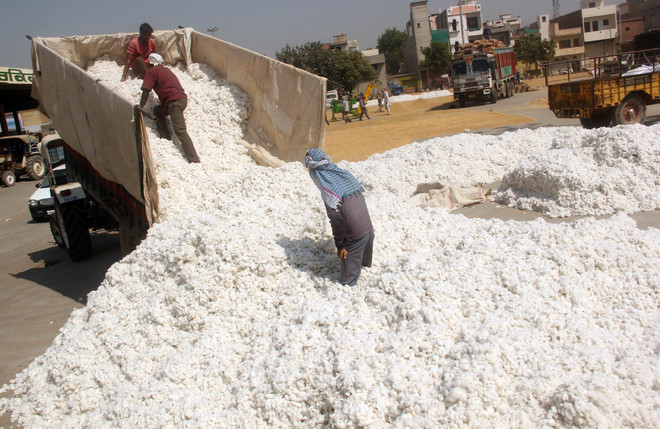 Buying cotton way above the MSP, private players are calling the shots at grain markets in Malwa. As a result, the Cotton Corporation of India — government-authorised agency for procurement — has not been able to enter the market this season so far.

With only private players left in the market now, it is the middleman (without licence to purchase cotton) who has started making hay by purchasing cotton directly from farmers on low price, citing high moisture content and other quality parameters, and then re-selling it to cotton factories or bigger players on higher rates.

Sources said these “middlemen” were also dodging market fee (1 per cent of purchased cotton) while working in connivance with senior market committee officials in mandis. “This illegal purchase does not even feature in the stock register of the market committee, causing huge loss to the state exchequer,” a source said.

Gurvinder Singh, secretary of market committee, Bathinda and Goniana mandis, said: “Farmers are happy that they are fetching good price for their produce as private players have been procuring it at above-MSP price.” On middlemen buying cotton directly from farmers, he said: “It’s not much. Selling small quantity of cotton via them does not make much difference.”

Preet Kanwar Singh Brar, District Mandi Officer, said: “It is not possible as even middleman would be selling it to private players. But if somebody is indulging in any illegal activity, we will get it probed.”

Ram Singh Bhaini Bagha, president, BKU Ekta Ugrahan, said: “With barely any check, such illegal practices are on for years. It is mostly the marginal farmers who get fleeced.”

No entry on register

The blaze had erupted on the 19th floor of the One Avighna P...