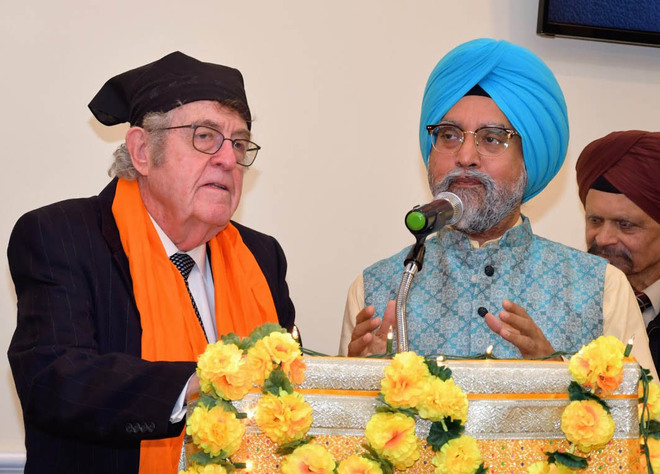 Gerald Krell and Adam Krell, directors of a documentary on Guru Nanak Dev, were felicitated by the Guru Gobind Singh Foundation (GGSF), Washington, on the occasion of 550th Parkash Purb of the first Sikh Guru.

The documentary is scheduled for premier screening at the prestigious National Press Club in Washington on November 20. As per a release issued on Friday, Gerald was given the Guru Nanak Service Award 2019 by the GGSF in a packed hall of 500 members from the Sikh community. Gerald also won the best director award at the Los Angeles Awareness Film Festival last month for the documentary. Over 50 films from all over the world featured at the festival.

Gerald, while receiving the award, became emotional and said, “I feel privileged to have worked on the film and it was a great learning experience for me and my team. We feel that the world needs to know about Guru Nanak Dev, who was ahead of his times. The documentary will serve as a worldwide educational outreach catalyst for the community, dialogue and interfaith understanding.”

Sarabjit Singh Sidhu, Chairman of the GGSF, said: “Guru Nanak’s message can bring people together. We felt that this film will play a role of creating bonds among communities and that is a great service to humanity. They deserve the award.”

Secretary of the foundation Dr Rajwant Singh, who is also co-founder of the National Sikh Campaign, said, “This documentary will inform Americans and rest of the world about Guru Nanak’s great legacy. The narration is focused on the key message in Guru Nanak’s teachings, which will also resonate with people all over the world.”

At the documentary’s screening in Washington on November 20, film directors, along with prominent religious leaders and authors, will be present. A panel discussion on the documentary and the historical role of Guru Nanak Dev will also be conducted. Public Broadcasting Service (PBS) will facilitate broadcast of the documentary on 200 TV stations all over America in the coming months as Sikhs are celebrating the 550th birth anniversary of the founder of Sikhism.