Drinking in cars at public places goes on unchecked

Cops issued only four challans in past one month 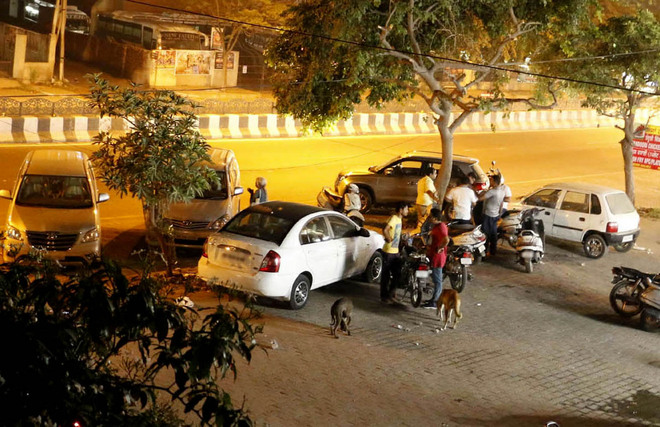 Scores of cars can be spotted in market areas near snack vendors and public places where bacchus lovers have a field day. File

The ‘car-o-bar’ (boozing inside cars) culture starts flourishing in the city in the winter season. Like in the past, this year is no different with barely any strict approach by the police to deter the ill-practice. Scores of cars can be spotted in market areas near snack vendors and public places where bacchus lovers have a field day. The ill-practice has been on in the city for many years.

During a visit by a Bathinda Tribune team, it was found that liquor consumption inside parked cars at public places near snack kiosks was on.

The police have been a mute spectator to the violation, emboldening the boozers to flout norms without any fear of punitive action.

Sources in the Police Department said heavier penalties and enforcement of law with an iron hand against the offenders was the only way to deter the ill-practice of liquor consumption in cars.

An ASI, requesting anonymity, said the offenders, especially those who consume liquor inside their cars, showed courage to drink even when police personnel were around.

He said most of these offenders cite their allegiance to influential families and on being intervened by policemen. They also boast of their connections in administrative, business and police circuits. Often, they can also be seen placing calls on being questioned by police personnel.

A group of four persons standing outside their car in front of a snack kiosk near Goniana Road, said, “Let alone alcometer test, they cannot even touch us. They are wary to take action against us for reasons best known to them. Moreover, most of the people consume liquor at public places these days. If the police are genuinely concerned, they should take action against people who consume liquor and those who sell them snacks and allow them to park vehicles in front of their vends.”

Deputy Superintendent of Police (DSP) Gurjit Singh Romana said, “According to records, four challans were issued in the past one month after performing a breath analyser test on boozers in different parts of the city. This year, a total of 68 challans have been issued for the violation. It is indeed dangerous drinking in cars and then driving. We will intensify our drive against offenders and issue challans to deter the ill-practice in the coming days.”

Residents said drunkards sitting in their cars often create ruckus and even pass lewd remarks on women. They added that when drunkards are high while being oblivious to commuters or pedestrians’ presence can be seen urinating at public places. If somebody objects to it, they enter in verbal spats and use abusive language.