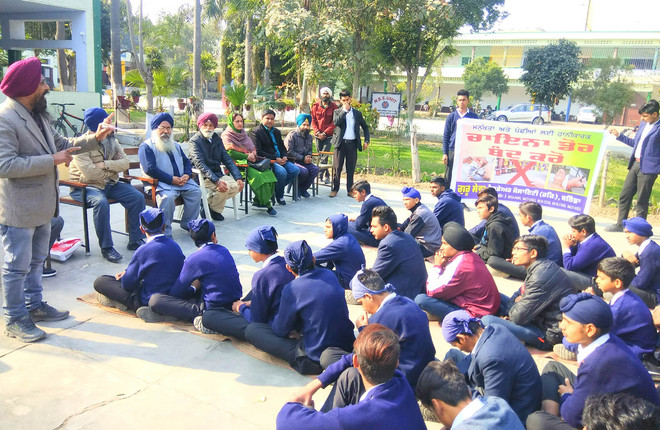 Students of Khasa School attend a lecture on harmful effects of Chinese string in Bathinda.

Guru Sewa Welfare Society, an NGO, conducted an awareness drive on dangers associated with the use of metal-laced Chinese kite-flying string, at Khalsa School on Tuesday. Members of the NGO made students of three schools aware of ill effects of the Chinese string and urged them not to use it for flying kite. Secretary of the Gurdev Singh Khalsa said: “We don’t want anyone to suffer harm from the Chinese string. Therefore, we are creating awareness among youths against its use.”

Commuters are most vulnerable as a slight contact with the string could cause severe injuries. Many had received grievous injuries in the past. It was also a threat to lives of birds, he said.

Traditionally, special strings are made for kite flying. These strings are made of thin cotton thread, which is treated with a paste made of glue and finely powdered glass to make it strong, whereas Chinese thread is made of nylon, with a metal coating to give it extra sharpness.

The National Green Tribunal (NGT) had imposed a complete ban on the sale, storage, production and transportation of the Chinese string, which is often used for flying kites. But despite this, it was selling like hot cakes. The NGT had also ordered registration of cases under the Prevention of Cruelty of Animals Act, the Environment Protection Act and the Wildlife Protection Act against those resorting to production, storage or selling of the deadly string, he said.

Gurdev said: “We want to reach those who take their life casually and have no concern for others as well. Sports are for enjoyment and entertainment. A sport which turns fatal should be shunned once and for all.”