Accident claimed the lives of 11 students in November 2017 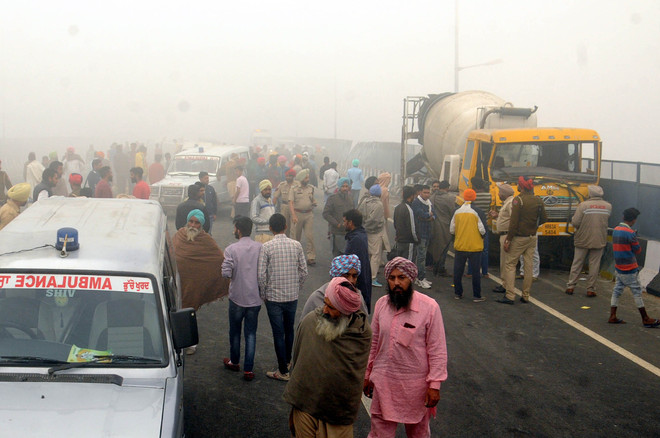 The cement mixer truck that ran over the students in Bathinda in November two years ago. Tribune file

In a two-year-old case where 11 students were run over by a truck on the Bathinda-Barnala road, the District and Sessions Court on Wednesday sentenced the driver of the truck to undergo two-year imprisonment. Besides, he was also fined Rs 20,000.

Meanwhile, the parents of the deceased children have expressed their displeasure over the verdict that the two-year sentence for a person responsible for taking so many lives is negligible.

The court also directed the authorities concerned to pay adequate compensation to the parents of the deceased children. As the convict was already in the jail and as per the law’s provision, he has already served two-year sentence and there is possibility that he will be released soon.

Notably, in November 2017, students from Rampura were waiting by the roadside for an alternative mode of transport as the bus they were travelling in had broken down. The incident occurred near Chetak Park, which is situated on the city outskirts along the Bathinda-Barnala highway. The rashly driven truck first rammed a Tata Sumo and then the students who were standing by the roadside. After the incident, the truck driver fled the spot.

Of the 14 students waiting there, nine were killed on the spot, two succumbed to their injuries later and two were injured. These were students of different colleges and coaching classes in Bathinda. The reason behind the accident was dense smog in the region that resulted in poor visibility on the road.

The police had registered a case against an unidentified person (driver) under Section 304 of the IPC. The families of the victims had submitted in the court that the accident took place due to negligence of the truck driver and alleged that the police could not substantiate the same in court that has resulted in only two-year jail term to the convict, rued the parents.