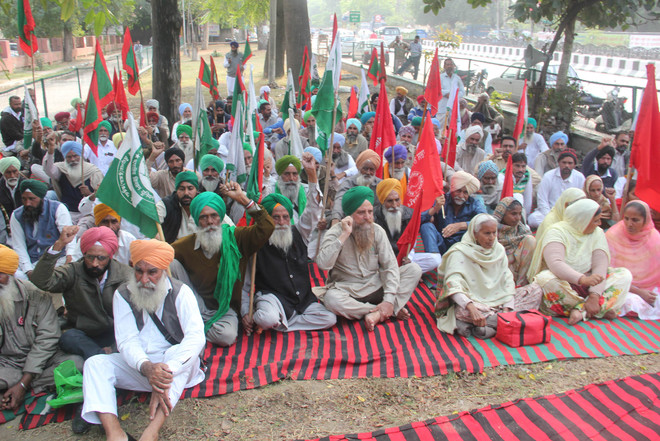 On warpath: Farmers stage a protest outside the district administrative complex in Bathinda on Wednesday. Tribune photo

The agitating activists raised slogans against the Central and the state government. While addressing the protesters, Kul Hind Kisan state acting president Balkaran Singh Brar and Rajmohinder Singh Kotbhara of the BKU Dakonda said both the governments had failed to address the farmers’ issues. The leaders criticised the state government for registering (stubble burning) cases against farmers. They said the red entry in the revenue records of farmers for stubble burning would not be tolerated by farmer unions.

The farmers alleged that the Cotton Corporation of India (CCI) was not purchasing the produce at the fixed MSP. They demanded that the CCI should purchase cotton at the MSP of Rs 5,500. They also demanded hike in the cotton MSP to Rs 7,500. The union further demanded that all kind of loan waivers for farmers.