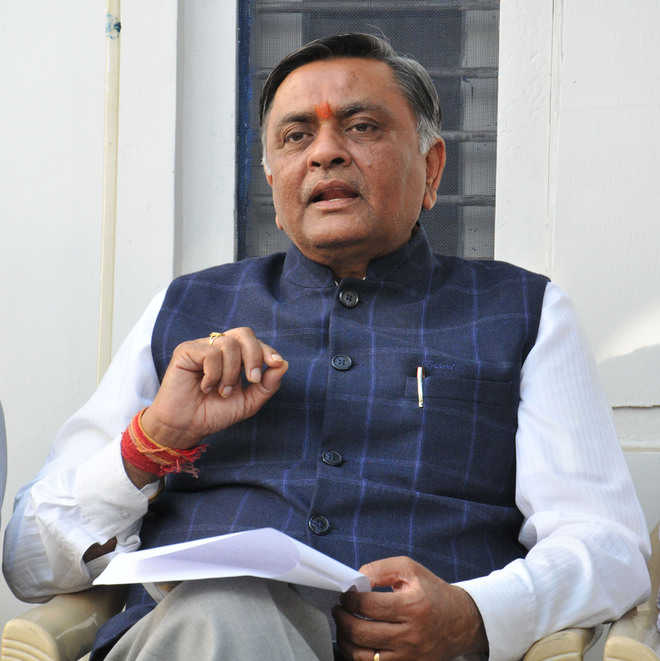 Farmers under the banner of BKU Ekta-Ugrahan broke the barricading and reached near the venue in the city, where BJP former minister Manoranjan Kalia was holding a meeting with the party leaders on Saturday.

numbers were also present during the protest.

While talking to mediapersons, Kotra said, “As we have already announced to protest against BJP leaders across the state till

the farm laws are not repealed, so today morning we got information that BJP leader Manoranjan Kalia is holding a meeting with party workers at a hotel in the city, so we have come here to stage a protest here.”

Lashing at the Centre, Kotra said, “Modi government has brought these farm laws for the big corporate houses on the name of agriculture reforms, whereas these laws would hit the agriculture and farmers hard.”

In the morning, Bathinda police had made elaborate security arrangements for the BJP leader’s meeting at a hotel in the city as all the roads leading to the hotel were cordoned off with barricading to keep the protesters at bay.

BJP state media co-incharge Sunil Singla said, “Manoranjan Kalia, who has been appointed party incharge for Bathinda MC election, today held meeting with the party district core committee at Bathinda. In the meeting, he held discussion for on the candidates for all 50 wards in the city.”

On December 26, when BJP state president Ashwani Sharma had visited the same hotel in the city and held meeting with the party workers, the venue was turned into fortress with

huge police deployment and farmers had staged protest at that time as well.