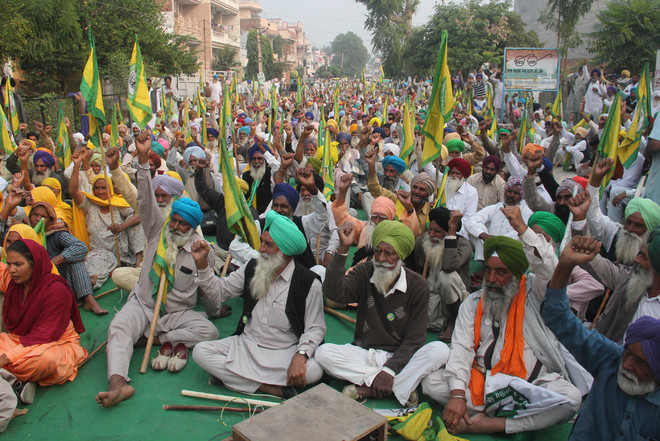 Numbers of farmers from the BKU Ugrahan faction—including farm women and children—staged a protest on Thursday in front of a hotel in Bathinda where the former state cabinet minister and senior BJP leader Surjit Kumar Jyani had addressed a press conference.

Farmers raised slogans against the minister and central government, demanding the repeal of the new agricultural laws.

A leader of the BKU Ugrahan, Hoshiar Singh, said: "We will lodge protest against all BJP leaders in the state, and won't let them enter or address or interact anyone here. These three agricultural laws are not against only farmers, but also against all sections of the society who would be equally affected by them."

"We have gheraoed both entrance and exit points of the hotel, and won't let Jyani go from here," added Singh.

During the press conference, Jyani lashed out at the Congress government in the state, and said that it has failed to honour its pre-poll promises, and that there is huge resentment among the people of the state, who would vote it out of power in the next assembly elections.

Reacting to allying with SAD, Jyani said: "There is a possibility of an alliance with SAD and anything is possible in politics."

Meanwhile, a heavy police force was pressed into action to prevent any untoward incident at the venue.