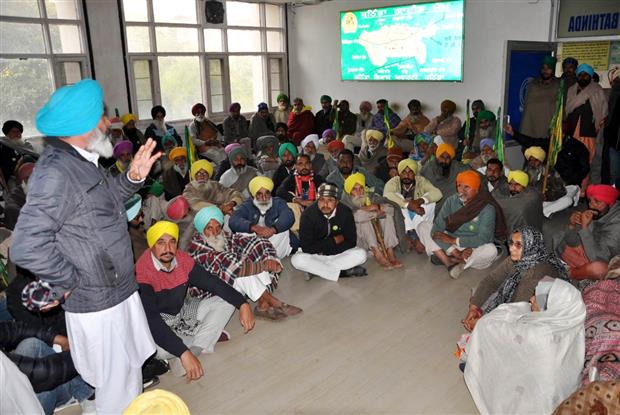 Farmers under the banner of BKU Ekta Ugrahan stage a dharna outside the Deputy Commissioner’s office in Bathinda. Tribune photo

Farmers under the banner of BKU Ekta Ugrahan staged a protest and gheraoed the office of the Bathinda Deputy Commissioner, demanding compensation for damaged cotton crop and cancellation of cases registered against farmers among other demands.

The protesting farmers raised slogans against the state government and district administration citing non-fulfilment of their demands.

Union general secretary Harjinder Baggi said: “We gheraoed the Bathinda DC’s office on Monday as he had been evasive on holding a meeting to discuss our problems or demands. After the protest, a meeting was held with the DC in which we brought forth the matter of compensation for the cotton crop damaged due to pink bollworm attack this season.”

Baggi said: “The DC has assured us that there is no objection of the Election Commission but he will still take their permission and start the distribution of compensation to the affected farmers. We have also highlighted the matter of cancellation of cases registered against farmers, debt-waiver to small scale farmers, and compensation to families of farmers who died during the Delhi farm agitation, among other long-standing demands. The administration officials have assured us that they will take all requisite steps to fulfil our genuine demands.”