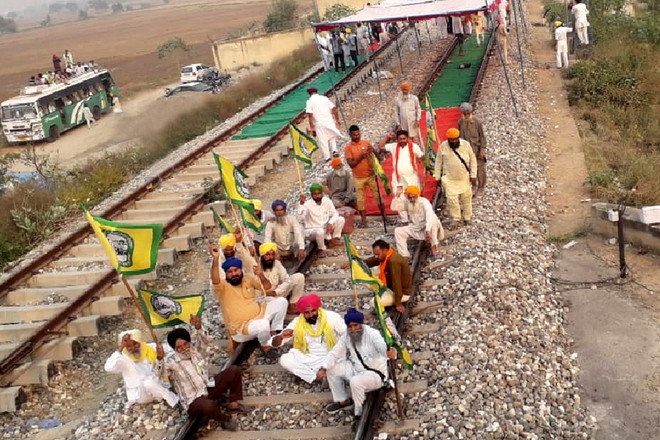 All farm unions of the state will meet at Bathinda on October 28 to decide on their ongoing protests outside private petrol pumps.

Private petrol dealers today held a meeting with leaders of the Bhartiya Kisan Union (Ekta Ugrahan) at Teachers’ Home in Bathinda over the discontinuation of oil supply since October 1 amid protests against the new agri-marketing laws.

Dealers RS Pathania, Harnek Singh held discussions with Shingara Singh Mann, leader of the BKU (Ekta Ugrahan). Briefing mediapersons after discussions, Mann said a meeting of farm unions of Punjab would be convened at Teachers’ Home in Bathinda on October 28, where the problem being faced by private petrol dealers would be discussed. He urged all farm organisations to attend the meeting.

We totally oppose the three laws and support farmers on the issue. But what is our fault? We are only facing losses due to protests outside our petrol pumps. —Petrol dealer

The sales at private petrol pumps across the state have either come to a halt or dropped by 50 per cent. Dispensing units have largely closed, with farm activists barricading almost all petrol pumps run by private companies.

Expressing support to the protests, dealers and employees of private petrol pumps have been sharing video messages on social media, pleading farmers not to target them. Talking to The Tribune, a private petrol dealer said, “We oppose the farm laws and support farmers on the issue. But what is our fault? We are only facing losses due to protests outside our business establishments. My petrol pump has been lying closed for over a month.”

Sangrur: Protests under the banner of the BKU (Ugrahan) continued in front of the Sangrur DC’s office for the third day on Saturday. Farmers have been demanding compensation and a government job for the family of farmer Meghraj Nagri, who died during a protest on October 9. “We would not lift our protest without getting adequate compensation and a government job for Nagri’s family,” said Gobinder Singh, a BKU (Ugrahan) leader. TNS