Raman, from ward number 35, is the wife of a liquor contractor, Sandeep Goyal 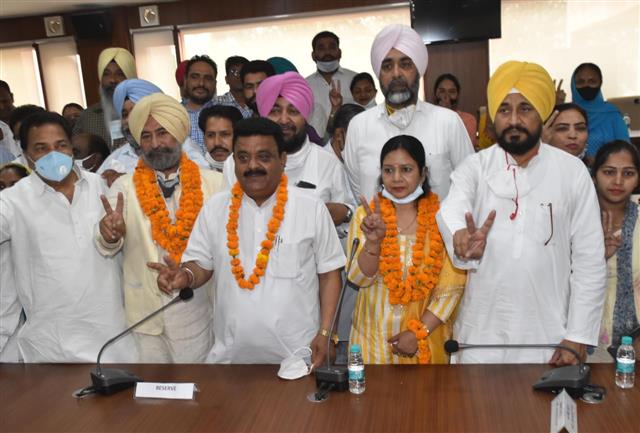 First-time councillor Raman Goyal has been elected as Mayor of Bathinda Municipal Corporation on Thursday.

Raman, from ward number 35, is the wife of a liquor contractor, Sandeep Goyal, and the first woman elected for the Mayor post.

Raman Goyal's win comes as a surprise as veteran Congress leader Jagroop Singh Gill—who won for a record seventh time—was seen as the strongest claimant for this post.

Jagroop Singh Gill had resigned from the post of Chairman, District Planning Board before contesting the MC polls. Moreover, Raman Goyal jumped into politics ahead of MC polls.

Sources claimed that the proximity of Sandeep Goyal with Jaswinder Singh Jugnu, also a liquor contractor, who is a close aide of Finance Minister Manpreet Singh Badal allegedly helped him to get his wife the post.

After the announcement of the mayor, Gill walked out of the meeting, and alleged that "earlier, it was said that the SAD letter comes out from the pocket of Parkash Singh Badal, today the letter came out of Manpreet Badal’s pocket”.

Without naming anyone, Gill said that certain section tried to defeat him during the civic body polls, but electors reposed faith in him. He added that Raman Goyal was "favoured" because of her husband Sandeep Goyal’s closeness with Manpreet Badal, and his close aides.

Technical Education Minister Charanjit Singh Channi—who was the observer for the election—said that all three were elected unanimously.

He added that Manpreet Badal, himself, was also present in the meeting and he congratulated all the three for being elected as mayor, senior deputy mayor and deputy mayor. Badal also said that it was the toughest decision to elect Mayor from 43 councillors.

Raman Goyal’s elevation to the post of Mayor is important due to the assembly polls due within eight months.

Political expert claims, that picking a Hindu candidate for the Mayor is a bid to consolidate Hindu votes in the Hindu dominant seat.

Secondly, the FM team can hold the power in their hands, and can dictate the term for development works in the city as non-experience, and first-timer has been given a chance to lead the MC Bathinda.