Movement will act as catalyst of change for youth, says Patar 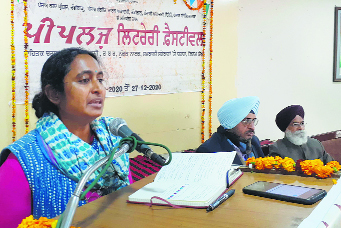 The farm agitation against the new agricultural laws has acted as a catalyst of change for the youth and young artistes/singers in the state who were otherwise considered misled. The movement, which initially began as an economic struggle, will spur a historical social change in our society in the years to come, Punjabi poet and litterateur Surjit Patar said during the People’s Literary Festival that started in Bathinda today.

Patar had returned his Padma Shri in solidarity with the farmers’ protest recently. While drawing on the positives of the ongoing agitation, the renowned poet added, “The fact that youth are witnessing this historical movement in front of their eyes will certainly pave the way to alter their mindsets and subsequently how they lead their lives. Now is the moment when youth energy has to be channelised in the right direction. The

movement has got unprecedented support and set a new precedent for generations to follow. The insensitive approach of the government will not be tolerated by them anymore.”

“Half the battle has already been won but now, divisive forces are at play. The wisdom lies in staying connected and united in the face of adversity to take the struggle to the next level,” he said. Kavita Krishnan, CPI (ML) leader spoke on the topic ‘India’s mass movements in contemporary times and its future’. She said, “The farmer movement that started from Punjab has paved the way for it to become a mass movement in the country. Winning or losing does not matter. What matters is the strong message that such mass movements send.”