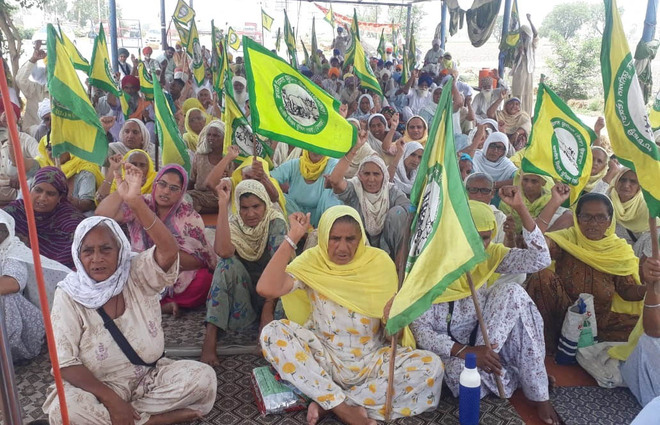 Farmers stage a sit-in against the central government at a toll plaza in Bathinda. Tribune photo

The central government’s decision to increase the minimum support price (MSP) for paddy, cotton and other crops have failed to evoke a positive response from the farming community in the Malwa region. Terming the hike “meagre”, farmers sought the prices be increased as per the recommendations of the Swaminathan report.

Notably, aimed at providing relief to farmers, the Centre on Wednesday announced a hike in Kharif crops. Ramkaran Singh Raman, state general secretary, BKU (Lakhowal), said, “A meagre increase of Rs 72 on paddy and Rs 200 on cotton is nothing but a cruel joke on farmers. The input cost of farming has increased considerably. We vehemently oppose the MSP hike. It is unfortunate that the government has failed to provide fair price for the crops sold as per the ever-increasing input cost till now. As a result, farmers, especially the marginal ones, are being pushed to remain under debt all their life. The Centre must be more pragmatic in its policies and increase MSP as per the C2 formula recommended by Swaminathan report.”

Balkaran Singh Balli, a leader of the Punjab Kisan Union, said: “Every year, a farmer spends heavily on seeds, labour, pesticides and diesel for irrigation and then the government simply washes its hands off by making a meagre increase in the MSP. Farmers who cannot bear the burden of debt end their lives.”

Baldev Singh Sandoha, president, BKU (Sidhupur), said: “We oppose this meagre hike. The prices of material required for sowing of paddy and cotton have increased manifold. Besides, the prices of petrol and diesel have skyrockted in the past one year, thereby burdening farmers. The MSP hike should reflect the corresponding increase in rates of input material.”