NGOs come together to protest against stubble-burning menace 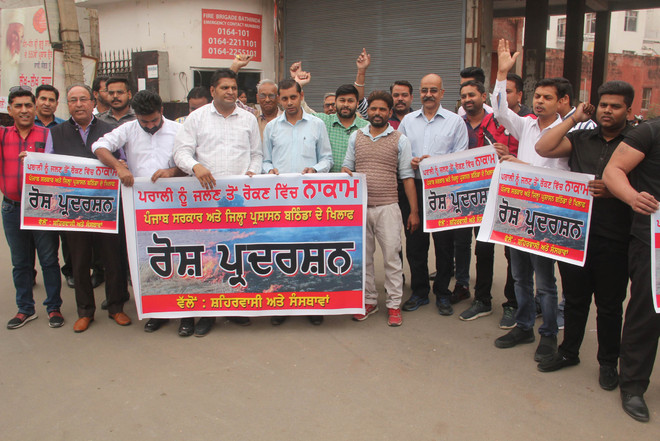 Members of the Association of Active NGOs raise slogans against the district administration during a protest at Fire Brigade Chowk in Bathinda on Friday. Tribune photo: Pawan Sharma

Members of various NGOs joined hands against the stubble burning menace in the city. A number of members from various NGOs, under the banner of Association of Active NGOs (AAN), gathered near Fire Brigade Chowk on Friday and raised slogans against the district administration and the state government for failing to come up with a viable solution to the menace.

NGO members stated that stubble burning could not have taken place, had the government anticipated and provided a viable alternative to farmers. Dr Vitull Gupta, member of the Punjab Human Rights Commission, said: “The state government could have made arrangements to provide machinery to farmers to manage stubble without burning it. Creating awareness alone would barely serve any purpose. The burning of stubble continues while administration has not come up with a comprehensive strategy to tackle the situation.”

AAN coordinator Sandeep Aggarwal said: “Neither the district administration nor the state government has put in requisite efforts to ensure zero stubble burning, due to which residents are bearing the brunt of increased air pollution.”

Sonu Maheshwari, executive member of the AAN, said: “All that the government has done is to spread awareness but at ground level, nothing concrete has been done to tackle the menace. While the leaders are busy playing vote bank politics, society continues to suffer.”