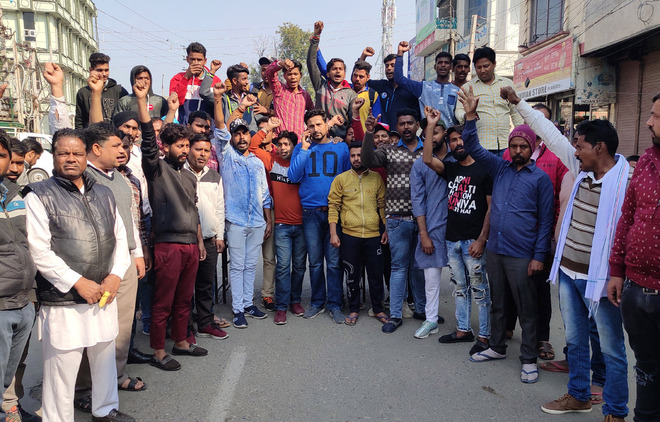 After being denied permission to set up stalls by the tehbazari branch of the Municipal Corporation, many vendors of the Sunday street market staged a protest here. They raised slogans against the Finance Minister, Manpreet Singh Badal, and MC officials. The protesters also blocked the April Singh road using their benches.

The vendors were reportedly denied the permission on the direction of the MC Commissioner, Bikramjit Singh Shergill. Tehbazari inspectors, Ravinder Cheema and Pargat Singh, told the vendors not to set up their stalls from that day as it “impeded the smooth flow of traffic” and said the civic body would soon allot them a suitable place.

Seema Sharma, cashier, District Bar Association, said her family had been doing business at the market for the past many years and it provided jobs to around 2,000 peoples. At a press conference on the same day, Jaijeet Singh Johal, a relative of Manpreet Badal, and KK Aggarwal, chairman, Bathinda Improvement Trust (BIT), said residents had been complaining about anti-social elements having a free run in the area. A rise in incidents of theft and mobile snatching was also witnessed on Sundays, they said. They said rush at the market caused traffic snarls.

They also alleged that the land belonged to BIT and 10 to 15 people had formed a gang and were taking Rs 500 to Rs 1,000 per table from venders. They said the police had been told to take strict action in the matter.