A hospital had to send away 20 patients due to a shortage of oxygen on Wednesday. 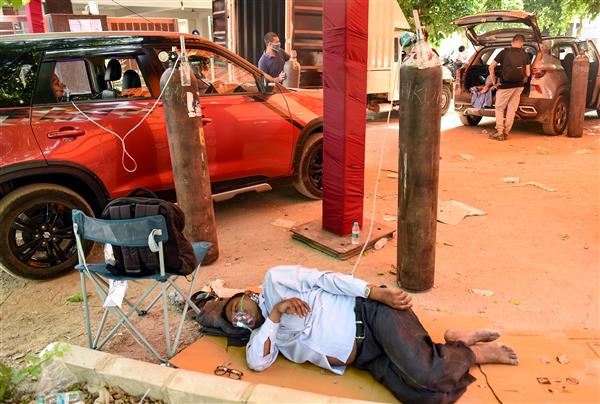 The ongoing shortage of oxygen supply to private hospitals has left Covid-19 patients staring at a medical crisis, with several hospitals stopping new admissions on Thursday.

The shortage has created panic amongst private hospitals, which are claiming that nobody knows how to handle the situation.

A private hospital located on Namdev road had to send away 20 patients due to a shortage of oxygen on Wednesday.

A private hospital doctor said: “We are very short of oxygen, and was assured that we will get supply by now, but no vendor is responding.”

The condition is so critical in Bathinda that a 60-year-old woman was taken to seven hospitals in the city, but she was not given admission as no beds or oxygen were available. She was taken to Bikaner in Rajasthan, where she died at 2 am at night while undergoing treatment.

Bathinda IMA president Dr Vikas Chahbra said: “This is a national crisis all across the country, we all along with the Deputy Commissioner were awake last night making arrangements, but oxygen can’t be produced, we have to arrange supply, an oxygen tanker was to arrive here last night, which has not reached till now, due to which problem has been created, if we got the tankers, we would have oxygen for two days”.

He also said that some private hospitals have stopped new admissions so as to ensure adequate oxygen supply to the patients admitted who were already admitted.

Civil Surgeon Dr Tejwant Singh Dhillon said: “Some hospitals are facing problems, while some are trying to keep adequate stock, but we have made teams which will visit and check the stock at private hospitals’.

Further, he said yesterday we got oxygen supply, which was supplied to the Adesh Hospital, as around 130 patients are admitted there. We are trying to provide adequate oxygen to all hospitals.