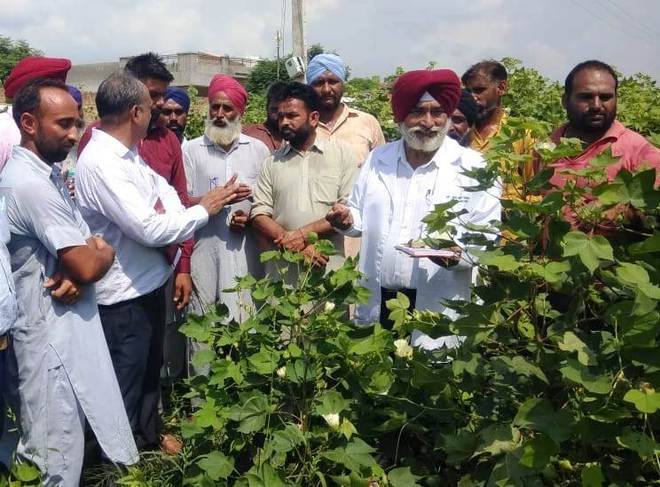 Pink bollworm attack on cotton crop is reported in various Mansa and Bathinda district villages, which are the main cotton sown areas in the southern Malwa belt in the state.

After learning about the attack, farmers are quite worried about the safety of their crops. Dr Baldev Singh, Joint Director (Agricultural Input) visited various villages in Jhunir block in Mansa district.

During the visit, he inspected cotton fields along with farmers in Bhamme Khurd and Khayali Chahilanwali village and it was found that pink locust infestation was seen in cotton but the percentage of attack was not same in different fields.

It is imperative for farmers to keep a close watch on the crop. Besides, they should spray the pesticides recommended by the Agriculture Department. —Dr Baldev Singh, Joint director (agricultural input)

Addressing the farmers, the official said it was imperative for every farmer to keep a close watch on the crop. Seeing the situation, they should also spray the pesticides recommended by the Agriculture Department. He also informed the farmers about the measures to be taken for control of locusts on cotton in the coming kharif season.

Mansa Chief Agriculture Officer Manjit Singh, who also holds the charge of Bathinda district, said he along with Joint Director Dr Baldev Singh had inspected the fields and checked the pest attack. “We have told the farmers to contact the department if they find pest in more than 5 per cent of the field,” he said.

Farmer leader and BKU Ekta Ugrahan state secretary Shingara Singh Mann said: “The situation at ground level is quite grim as we are getting reports from farmers daily that despite spraying pesticides, the pest is not dying and destroying their crop.”

He said: “We demand that the state government should collect samples of the pesticides and get them checked, as we feel that fake pesticides are being sold to farmers in the state, which is not solving the purpose.” Mann also claimed that if the situation is not controlled, it could spell trouble for the entire cotton produce, as was the case in 2015.”

AAP legislator Gurmeet Singh Meet Hayer has alleged a "big scam" due to ineffectiveness of pesticides on pink bollworm despite repeated sprays, causing huge losses to farmers. “Just as the white fly destroyed the farming community due to counterfeit medicines during the Akali-BJP government, pink bollworm was destroying the community today,” the AAP leader said, demanding a high-level investigation into the whole matter and Rs1,000 per quintal relief for cotton farmers.