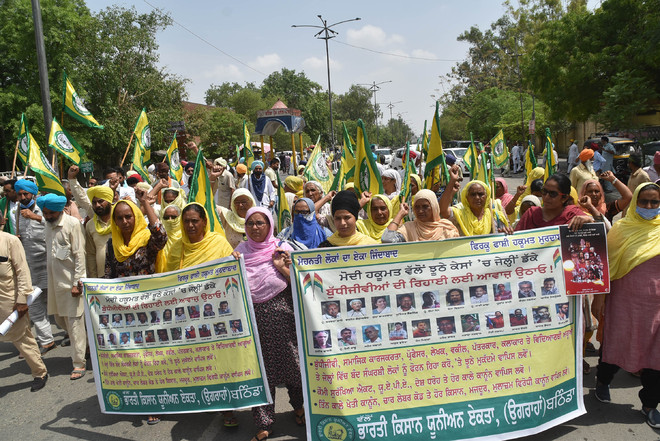 Farmers under the banner of the BKU (Ekta Ugrahan) staged a protest against the arrest of intellectuals and rights activists by the Centre and demanded their release.

The protesters blocked the road leading to the Deputy Commissioner’s residence and raised slogans against the Union Government before carrying out a protest march in the city.

Addressing the gathering, union’s legal adviser NK Jeet said, “The democratic fabric of our nation is getting eroded under the current government. Those who write for seeking justice or protecting basic rights of others are labelled as anti-national and booked under serious laws such as sedition and UAPA. Activists implicated in false cases and arrested in Bhima Koregaon case are languishing in jails for three years now. There are elderly persons among those jailed who are suffering from serious illnesses, but they were not granted bail till now.”

Harjinder Baggi, general secretary of the union, said, “It is time that people of the state as well as the nation wake up to the communal and divisive politics of the government and unite against it to protect and preserve the democratic fabric of the nation. There were brazen attempts at sabotaging the farm agitation, but unions collective resolve could managed to keep the stir on course. Our movement against three agricultural laws will continue until our demands are not met.”