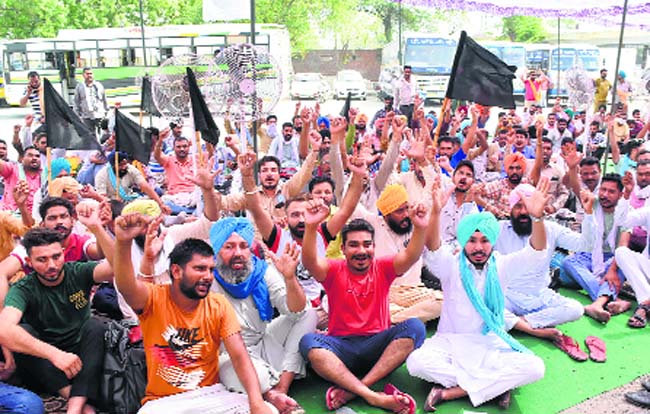 The protesting union members suspended work for four hours and raised slogans against the state government, demanding regularisation of services.

Gursikander Singh, union president, said, “Protests and representations submitted to the authorities for the long-pending demands on numerous occasions have failed to wake up the state government from its deep slumber. So now we have decided to launch an indefinite stir, which will continue until the government relents and fulfils our demands. For now we have decided to hold a three-day strike. Also, a state-level protest rally will be taken out tomorrow followed by a march towards Moti Mehal in Patiala.”

He said, “Before forming the government in the state, Chief Minister Capt Amarinder Singh had promised that the services of contractual and outsourced employees of different state departments will be regularised. He had also promised ‘Ghar Ghar Naukri’ and end of transport mafia but nothing has been done on the ground. There is huge resentment among the transport sector workers as many of them have been rendering their services for the past over 15 years without being regularised. Now if the government representatives keep cancelling meetings to listen and address issues of its employees then it can reflect poorly in the upcoming elections.”

Meanwhile, passengers had to bear the brunt of the strike as a majority of the government-run buses did not ply on roads and they had to wait for hours for private ones to reach their destinations. — TNS