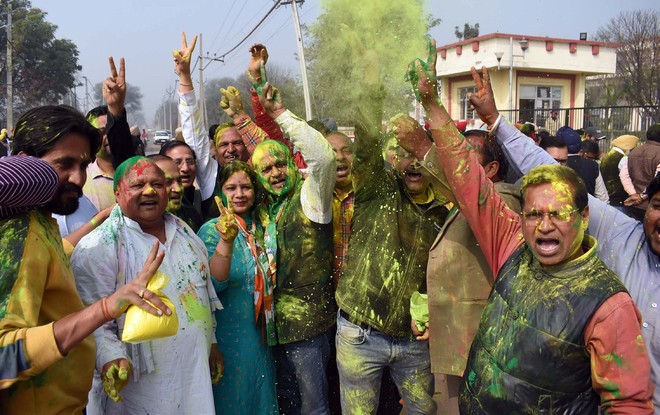 Faced with the backlash over the three farm laws, the BJP failed even in its strong pockets in the hinterland of Malwa in the local body elections. The farmers unions are quite active in the region and staging protests against the BJP-led central government at the Delhi border and in the state as well.

Most of these areas are dominated by the Hindu community, where BJP supporters have sizable numbers, but despite this BJP failed to get any vote. In Bathinda, the BJP failed to open its account. In 2015, BJP had won eight seats in alliance with the SAD and its two leaders Tarsem Goyal and Gurinderpal Kaur Mangat remained senior deputy mayor and deputy mayor for 10 years in two consecutive terms. Goyal did not contest the polls this time, while Mangat lost badly from ward No 1.

In Abohar, despite having its MLA Arun Narang, who had defeated Congress giant Sunil Jakhar in 2017 Assembly elections, the party drew a blank. Of 50 wards, Congress won 49 and SAD one.

In Fazilka, the BJP was in power in the MC from the past two consecutive terms and this Assembly seat was also contested by BJP former minister Surjit Kumar Jyani, but still the party performed badly and was able to win only four of the total 25 wards. Even BJP district president Rakesh Dhuria’s wife lost from here.

In Ferozepur, where BJP leader Sukhpal Singh Nannu won in 2007, the Congress won in all 33 wards. However, the BJP was able to win only one seat in Moga, one in Muktsar and one in Jaito in Faridkot.