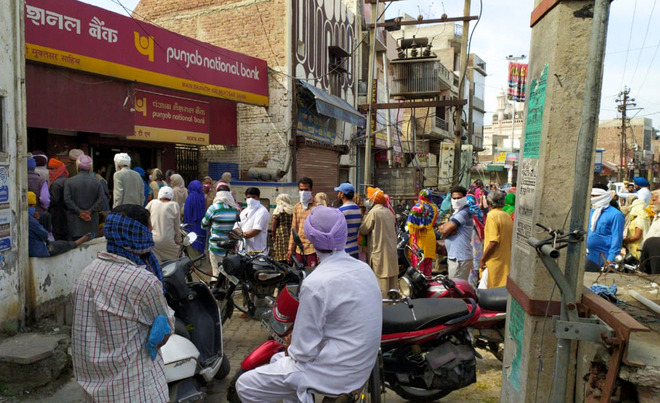 throwing norms to winds: People wait for their turn outside a bank in Muktsar on Monday.

On the eighth day of curfew, when the banks opened on Monday, safety norms like social distancing were thrown to the wind and that too in the presence of cops. There were long queues of people outside the banks and a number of them had to return empty-handed as the banks closed at 2 pm.

A large number of people started coming to marketplaces early in the morning. Though two cops each were deployed outside all the banks, they proved helpless in managing a rush of customers. As a result, there was no social distancing norm followed anywhere in the town.

Mostly poor people were seen waiting for their turn in queues. A majority of people said they had come to withdraw money as they were not using any debit card. Further, long queues were witnessed outside the ATMs as well. Earlier, a number of ATMs had gone dry.

Surjit Singh, a daily wager, who had come to a bank at the local grain market, said, “The present situation has reminded us of the demonetisation days. We had to wait for hours in queues to replace the old currency notes. Now, again, we are standing in queues just because of curfew. The Centre and the state government should have made proper arrangements before enforcing curfew. We are not having money and the banks too have opened after a week.”

Besides, bank employees too were seen distressed and feared about their health. “We are short in number today and there is a huge rush of customers who are not even following the safety guidelines issued by the government. Who will be responsible if any coronavirus positive person visit here? He/she will transmit the virus in a number of others,” said some bank employees.

Meanwhile, Deputy Speaker Ajaib Singh Bhatti, who is an MLA from Malout, reviewed the working of the district administration, appreciated it.