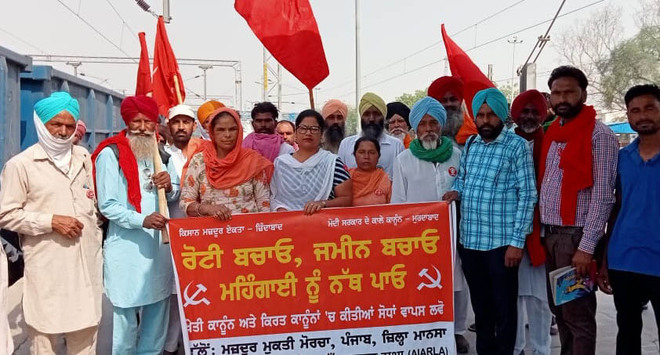 Members of trade and workers’ unions leave for Tikri border on Friday.

Hundreds of members of trade and workers’ unions from the state have headed towards protest venues at Tikri and Singhu borders to observe International Labour Day (May Day) and support farmers’ agitation against the Central farm laws.

On a call of the Sanyukt Kisan Morcha, the day would be celebrated as ‘Mazdoor-Kisan Ekta Diwas’ and trade and labour union leaders would address the gatherings.

Trade unions from the Doaba and Majha region headed to the Singhu border while those from the Malwa region went to the Tikri border. In the wake of spike in Covid cases, there are a few unions which have curtailed number of members who would visit protest sites at the Delhi borders.

Talking to The Tribune, Mahipal Sathi, state coordinator, JPMO, said, “Members from different trade unions in large numbers left for Tikri and Singhu borders to observe May Day and leverage support to the ongoing farmer agitation.”

Rajwinder Rana, state president, AICCTU, said, “Even as labourers remain engaged in work amid wheat procurement season, a large number of them have decided to take part and support farmer agitation both at the Delhi borders and in the state.”

Lachhman Singh Sewewala, state general secretary, Punjab Khet Mazdoor Union, said, “We do support farmers’ agitation but also believe that rather than all unions converging on the protest venues at Delhi borders, it would be more effective if some labour unions stay back and hold rallies in the state.”