‘Nights of Plague’ by Orhan Pamuk: Creating fiction out of history : The Tribune India

‘Nights of Plague’ by Orhan Pamuk: Creating fiction out of history 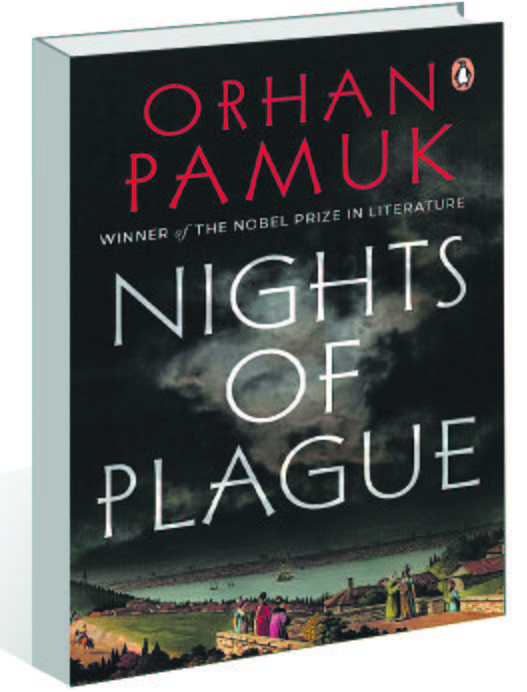 PB SHELLEY, the romantic poet, in ‘Defence of Poetry’, emphasises that “a man, to be greatly good, must imagine intensely and comprehensively”. In terms of the theory of fiction that illustrates the very inherent features of historical “truth” and its artistic interface with fiction, many novelists passionately use their fancy for the creation of a genre that underscores the tensions between antiquity and contemporaneity, between the traditional and the modern, between imagination and the “real”. It is this predisposition to create fiction out of history that lies at the heart of Orhan Pamuk’s novels.

Defending the writing of ‘The Satanic Verses’, Rushdie once declared: “...my overt use of fabulation… was not attempting to falsify history, but to allow fiction to take off from history... a way of creating the sort of distance from actuality that I felt would prevent offence from being taken.” In a similar manner, Orhan Pamuk in his new novel ‘Nights of Plague’ coalesces three genres, namely the detective novel, the historical and the political allegory, to write a chronicle of eight months of the dread of pestilence, lockdowns, and the obscenity of authoritarianism on a fictitious Aegean island. It’s a subject he has laboured on for more than a decade with the idea of making a final comment on what we have recently suffered. Myth and fable as a microcosmic view of the declining Ottoman Empire reflect the archetype of the continuity of violence, intrigue and suffering which is intrinsic to history.

The “calm and charming island” Manchuria, largely Orthodox Christian in its belief, is situated in the eastern Mediterranean between Crete and Cyprus. The bubonic plague arrives here in 1901, carried to its shores by Muslim pilgrims returning from Mecca and Alexandria during the late Ottoman period when Sultan Abdul Hamid II was the reigning autocrat.

After the death of the Chief Inspector of Public Health and Sanitation, Bonowaski Pasha, the Sultan sends his most gifted quarantine specialist to the island, Nuri Ney. He confronts an atmosphere of racial tension between Christians, Muslims, Greeks, Ottoman Turks and rogues from far and near swarming the island. Kurtz’s scream of “Horror! Horror!” in Conrad’s ‘Heart of Darkness’ resonates through the novel, especially in the repeated murders of those who backed restrictions based on science giving rise to suspicion and rebellion. Nuri also has the task of a detective to go to the root of the murder of Pasha and the causes of the plague.

All the while, the rulers on the island either gag the news about the plague or destroy the communication lines to evade the orders from the Sultan. Sami Pasha, the Governor of the island, denies that there is a crisis but finally admits to the rising fatalities. While many stop trusting him, some hold him in high esteem, especially as a counterforce to the national discourse of the plague that serves to oppress the Muslim community by holding them responsible for the disaster. The outcry against authoritarianism resounds across the island: “Nobody ever wants quarantine, not governors or mayors, not shopkeepers nor the rich… They will reject any evidence that disrupts their usual ways, they will deny any deaths, and even resent the dead.”

As the death toll rises, people panic and become irritable, which inevitably leads to inter-racial violence backed by the state mechanisms. Thus, it becomes difficult to know what to believe in, science or the rejection of it, in order to gain favour with the minorities by standing up against the west.

Bringing in various themes from his previous work, Pamuk skillfully creates a medical narrative with political upheavals and murder thrown in. It resonates with the proliferation of ultra-nationalism widely discernable in the contemporary world, particularly Muslim fatalism essentially evident in the past as well as in the present. Nationalism at once comes into clash with cosmopolitanism. With the clash of cultural and political values, history strikingly repeats itself in all its audacity and humility.

As the story begins, we hear the narrative in the voice of Mina Minger writing in 2017 from Istanbul, often seamlessly moving from the first person to second or third, thereby representing multiple historical standpoints on multifaceted issues that the book is replete with. Her source is largely the letters from Princess Pakize to her sister, the invented daughters of the actual Ottoman Sultan Murad V, who in 1876 was deposed by his crusader but dictatorial brother Abdul Hamid II. The narrative strangely leaves the reader with a sense of disbelief and suspicion, a point deliberately made to project a scenario of distrust, deception and fantasy.

The agility of creative imagination moves from history to fantasy that is deftly weaved by Pamuk into the history of Turkey, the ‘sick man of Europe’, with all its manipulations, misgivings, murders and the outbreak of the pandemic. Steeped in history and rife with suspense, ‘Nights of Plague’ is an epic story set more than 100 years ago, with themes that feel unusually present-day. Pamuk has succeeded through his allegorical style to give the obvious message of putting the alarming experience of the Covid pandemic under a scanner, particularly misinformation, complacency and the grossly political motives behind the health issues.