Punjab in all its colours : The Tribune India

Punjab in all its colours 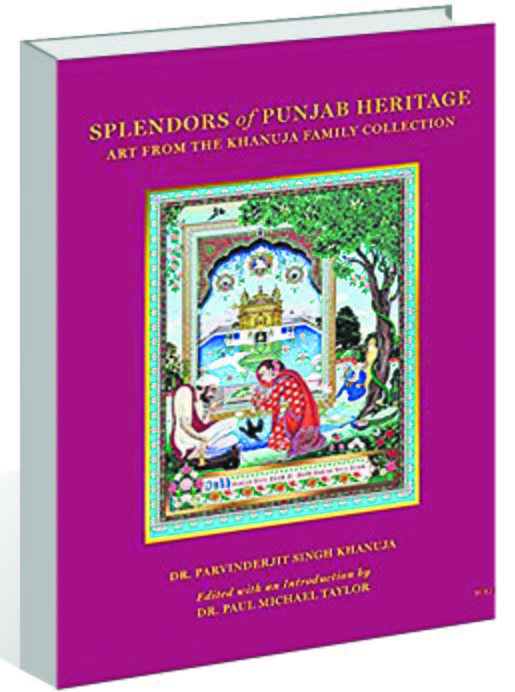 A collection of artworks and historical memorabilia representing the cultural history of Punjab, ‘Splendors of Punjab Heritage’ is a delight to hold in your hands. Drawing on possessions with the US-based Khanuja family, it is rich in images — illustrations, photographs, maps, manuscripts — as also information on Sikhism, from which it draws its content.

The book looks at the depiction of Sikh Gurus through a wide spectrum of artworks, contains photographs and paintings of various gurdwaras, Maharaja Ranjit Singh and his reign, encounters with the Brritish, the martial side of Sikhs, Sikh coinage and embroidered and woven heritage.

The book has been authored by Dr Parvinderjit Singh Khanuja, a US-based oncologist with an immense interest in art. He has been collecting Punjab-related art for nearly 15 years and has contributed to the creation of a permanent Sikh art gallery at the Phoenix Art Museum.

The collection includes photographs by famous chroniclers, including Samuel Bourne (of Bourne & Shepherd studio), Henry Martens, JD Harding and Waldemar Von Preussen. If photographs of the Golden Temple dominate the book, there are rare images of Sikh troops in NWFP and in Sudan. British photographer Felice Beato’s panoramic shot of the Golden Temple (1859) is breathtaking.

The sketches and paintings are from as early as the 18th century, as also those by contemporary artists. Important names include rare works from ‘Original Sketches in the Punjaub’ by a British army officer’s wife referred to as ‘By a Lady’. However, most of the earlier artworks are untitled, their creators unknown. The contemporary artists featured include MF Husain, Arpana Caur, Devender Singh, Ruby C Tut and the Singh Twins.

Overall, a book that implores one to look for the explored as well as the unexplored in Sikh art.