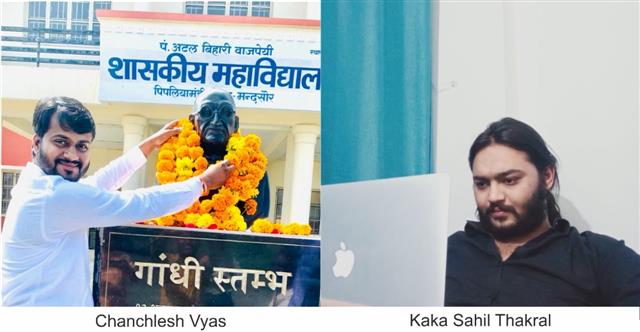 On one hand we find the youth of our country surfing through the internet, levelling up their PC games, browsing for new movies. On the other hand we find the old and elderly running the country at all the levels of governance. As if it has got involved in our culture that the politics should be dominated by the older generations.

But should this be the situation at all? Are the youths only responsible for themselves and their family? Shouldn't they also level up the politics of our country like they level up their games? Why do we find the youths working only in the government and corporate sectors and almost absent in politics of our country. Politics- which is the deciding factor of the smooth running of a country should rest in responsible and reliable hands.

Seeking answers to all of such questions we came across a personality who is  not only himself involved in politics but also motivate others to take part in it. Coming from a small town of Piplia Mandi close to Mandsaur, Madhya Pradesh, Chanchlesh Vyas always aspired to do something different. The great thing about these kind of people are they don't do different things but they do the things differently.

Although belonging to a middle-class non

-political family Chanchalesh decided to step into politics without a second thought. His willingness to change and improve things in spite of all the dirty facts known about politics made everyone stand dumbstruck. The way his journey unwrapped layer after layer is just mesmerizing.

Starting from the year 2011 he became the GS (General Secretary) of NSUI (National Students Union of India) in Mandsaur District. Thereafter placing himself in

2013. This phase was the phase of reformation that Chanchalesh went through. He evolved as a completely new person after this event. His active participation in all the works under the leadership of Youth Congress President, Kunal Chaudhary helped him sail through the entire process with a proper guidance.

Moving on to his next achievement he was appointed as a coordinator in Youth Congress IT Cell where he stimulated the youth by displaying his wonderful experience as a young politician. He also took up the responsibility of supporting the people who were aspiring to get into this field of work.

After being stuffed with a full 2 years of experience as an IT Cell Coordinator, he then absorbed the role of the president of the Indian Youth Congress Madhya Pradesh IT Cell on August 23, 2019. In addition to this, upon the admission of Congress government in Madhya Pradesh, Chanchlesh was made the public participation chairman of Atal Bihari Vajpayee Government College Pipliamandi. His working period there continued till 6th of May 2021.

A sneak peek of how Kaka Sahil Thakral is revolutionizing eCommerce

"I don’t know what will be my life story, but you will never see me quitting!," says Kaka Sahil Thakral, India's youngest Digital Marketer. Being born and brought up in Jamalpur, Bhiwani(Haryana).

Sahil has proved, “sky's the limit,” and no milestone is ever enough if you have the right passion and zeal within you.

The man truly needs no introduction, with a firm believer of the quote, “miles to go before I sleep,” Kaka Sahil Thakral is a true idol in himself. Well, here’s something no one can think of achieving at such an early age - His website crosses INR 10 Million sales in just first year of launch, isn’t that amazing? You can also buy furniture online from his website shop.gkwretail.com an subsidiary he started from seed funding of GKW Retail Solutions Private Limited.

Applying hands in Politics as well, at the age of just 25, he had also contested Lok Sabha Election in Hisar, Haryana as Youngest contestant of Haryana in 2019 & assembly election From Hansi, Haryana in 2019. He is Haryana State President of Sapaks Party as well.

Kaka Sahil Thakral proved how success is all about breaking the barriers of the comfort zone and working continuously. Being determined since college days, Sahil Thakral was highly curious about how the industry works.

His never let it go attitude made him kickstart his entrepreneurial journey in 2014, and he never looked back since then. He believes, nothing is impossible and even the hardest rock can be climbed with sheer hard work, perseverance, and determination.

He helps brands in creating a full-fledged digital marketing strategy, assists drop shippers, and has all kinds of solutions to lead your commerce from the front.

His hustle has made him a proud Founder of Digital Marketing Agency- Make Digital World Easy- a Google Badge Partner.

Connect with these bright minds today to shape your dreams into reality today.

Drawing conclusion from the above information it can be said that Chanchlesh vyas & Kaka Sahil Thakral are the ideal youth icon of our country who has never failed to inspire people. No One knew that Politics & market which is known for its dirty games could be handled in such a beautiful way. Their actions have spoken louder than any appreciation about them.