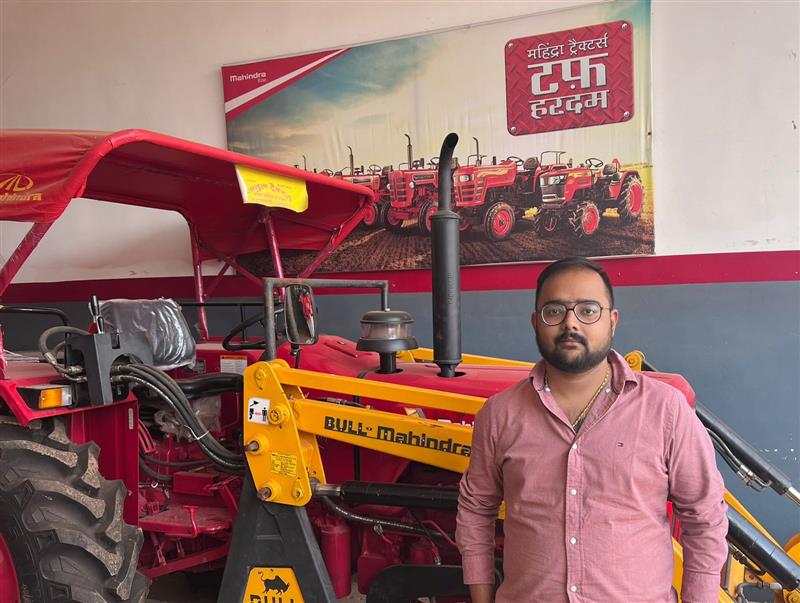 Atul Agrawal said that his priority would be the farmers first ,his company will deliver any farm machinery or tractor ordered by any farmer as quickly as possible.

In the announcement, they stated that they will provide all types of machines and materials to customers in a very short period.

Atul Agrawal, the entrepreneur who owns a shop that supplies all necessities such as machinery, tractors and dedicated professionals to farmers. Atul Entrepreneur is being praised by the local government. They expect very high profits, so they are investing large sums. Atul Entrepreneur estimates that their total revenue will easily surpass 6 million by 2022. Atul Tractor Store is an excellent startup.

The store began to make very good profits after the sixth month. Without the help of Atul Agarwal, who brought all the necessary items under one roof and his dedication to the team, this store would not have been possible. Atul Agarwal's idea for this outlet was a huge success. There are many dealers in Chhattisgarh, but none of the old stalwarts. This is actually an ultinational firm. Recently, Chhattisgarh was granted its first establishment purely on farmer's demand.

It is a surprise to everyone that a local dealership can compete with the big guys. He is technically the chief of online marketing, and also the managing director at Atul Tractors. Atul Agrawal also donated large amounts to provide relief for patients suffering from the coronavirus virus in India. The Entrepreneur also donated food and clothing to those who were left behind by the lockdown.

Atul Tractors can be your one-stop shop for all things farmer. Farmers have the option to pay cash for delivery or via online payment options like Nexus Pay, Amex Card, Nexus Pay and Bank Deposit. Atul Tractor Store will deliver the tractor to the farmer's doorstep as soon as the order is placed. You can find everything you need for your tractor, including parts and machines. They offer their services at no additional cost. Atul Entrepreneur inspires people all across India to start their own business.

Looking forward into the hardships of Atul Agrawal

Many people who you meet have "Giving up" syndrome. Very few people work hard to achieve every goal. Everyone has a goal in their life. Only a handful of people are capable of achieving their goals. The most successful person is the one who achieves his goal.

Atul Agarwal was one of those people who set obstacles in his way to success at the beginning. But, after hard work, Atul Aggarwal reached all of his goals. He is now known as Atul Entrepreneur. His start-up Atul Tractors Store is his success story. He is also a successful CEO.

Atul Agrawal and his virtuoso ideas.

Entrepreneurship is something that everyone has. To become a successful entrepreneur, it takes many years of dedication. People often settle for comfort and experience less growth in their lives. Entrepreneurs have a mindset that recognizes the difference between passion and profitability. They combine these to reach their goals. The life of an entrepreneur can be described as luxurious and royal.

We often forget that the entrepreneurs who have been through so much, including all of the sleepless nights, have worked tirelessly every night. It was their dedication and hard work that helped them reach this point. Atul Entrepreneur's dedication has earned him the award. In the next few days, he will be a millionaire.

Atul Entrepreneur envisions this start-up becoming a multi-millionaire business by 2021. This vision is possible due to the growing number of clients. It seems that the covid-19 shortage was not able to harm his business. Atul Agrawal is also an entrepreneur who has invested in several ventures. He has also helped numerous NGOs and small businesses.