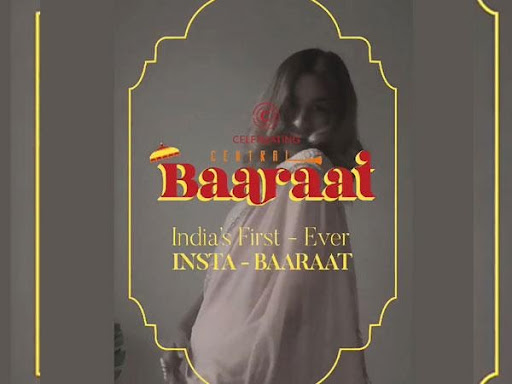 Weddings! The season of new adventures. While weddings make one  emotional, the wedding baaraat, preceding the wedding is something no one  wants to miss out on, which is not only welcomed but celebrated with much  pomp & fervour. While everyone attends the wedding ceremony in- time,  many of them are not able to attend the baaraat in person. Hence, we have  Central, along with Ndmpl to toast & give an experience of a lifetime, that is  unparalleled. ‘An adventure that’s about to begin, for you to be there in  squares for a fun filled affair’. Beating all the raging challenges of Instagram  & coming up with something as unusual as an Insta- Baaraat.

What do you think it is about? The most quotidian elements would be  entertainment, contemporary fashion & raving music?, but that’s not the end!

We hope you’ll be taken by surprise, with what Centrals got in store for you.  While you can’t make it in person, how about being there digitally? The  journey was sensational & electrifying. Right from building an intrigue, to  having a logo reveal for Central baraat, every element was presented in a  grand gesture. Special Invites had been curated to welcome & invite the  guests & audience. An expectational guest list reveal & audio reveal had  been done to showcase the custom baraati track, where all the influencers  would groove to Centrals baraati tune! They also had a remarkable dance  choreographer go live with a few affluent influencers, which was immensely  interactive, where the choreographer would teach the audience & influencers  some fun, exciting dance moves! Towards the end they had a beautiful  showcase of influencers ramp walking & posing in Central’s wedding  collection that is so versatile, fresh & diverse. Finally on the big day of the  baraat, Central had 40 influencers who went live, all together at the same  time & created an astounding havoc on the gram!

Who could tell that a Baaraat being digital could be this upbeat, fun &  remarkable. We truly hope for each one of you to be a part of the Central  Baaraat & enjoy thoroughly.

What Siddharth Gurav, Head of Digital Marketing has to say - “Weddings  happen through out the year. As much as people reach in time for the wedding ceremony, they don’t for the baaraat. Today a wedding baaraat is

so important for a bride, the groom & especially their close ones. It’s one of  the most memorable & irreplaceable moment in their life. There couldn’t have  been a better opportunity than to a celebrate a ‘wedding baaraat’ digitally, in  Centrals style that would evoke the right zeal, spirit & enthusiasm in the  hearts & minds of our audience.”