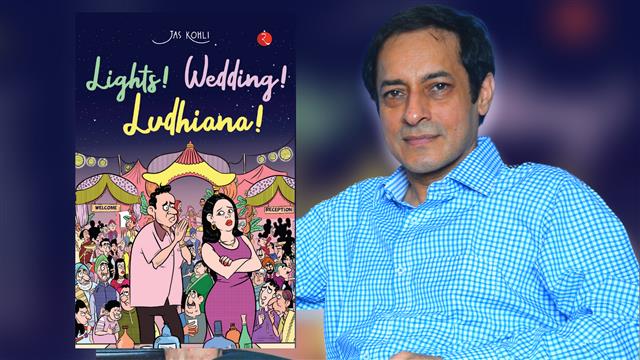 There aren’t many comedy writers among the Indian fictional authors, but the few emerging ones are knocking it out of the park with books that are a complete laughter riot. One such author is one of the nation’s most beloved plastic surgeons, Dr Jas Kohili, who recently released his third novel, ‘Lights! Wedding! Ludhiana!.’

This book centres around the Raheja family, who is trying to avoid a secret from being let out and the hilarious lengths they will go to keep it safe. With hilarious characters, absurd situations, irony and more, this book will leave any reader in splits.

‘Lights! Wedding! Ludhiana!’ is Dr Jas’s third book written in the comedy genre. His previous book ‘Anything to Look Hot’ was part memoir-part fiction, with which the author found that adding in instances of comedy made it more appealing. Since then, he hasn’t looked back. “I felt I could utilize my way with comedy in my writings. The positive response from my readers regarding the humour quotient in my first book pushed me into the path of becoming a full-time humour author,” said Jas Kohli. He also added that he found it very gratifying to bring smiles and laughs on people's faces during an era wherein the rat race induced stress is all-pervasive.

Dr Jas Kohli has also written another medical fiction titled ‘Light! Scalpel! Romance!,’ which is a sweet yet funny romantic comedy set in the world of medicine, something with which he is very familiar. “Usually, I try to write about subjects which I am familiar with since I can depict the finer nuances of the characters as well as realistic descriptions of the settings,” admitted Dr Jas Kohli. This led him to centre his third book around Ludhiana, his hometown.

Comedy is a kind of genre that looks easy but is much harder to produce. One has to have a solid premise, perfect timing and walk the fine line between hilarity and cringe. “Humour and comedy have many ramifications. Apart from my sense of humour, I utilize inputs from so many sources. Of course, one needs to observe things with the curiosity of a child. I encounter so many people with wayward behaviour. Our society itself has so many peculiarities, and this is often revealed in the media,” explained Plastic Surgeon Dr Jas Kohli, who has managed to find this fine line and succeeded in writing brilliant comedies. He wasn’t alone in his journey; he had help from his friends and relatives who would hear out his hilarious narratives regarding the subject he’d be writing about. “Comedy can also be created out of thin air- there are certain techniques for it, including wordplay and creation of imperfect characters,” mused Dr Jas.

Though a brilliant comic writer, Dr Jas Kohli also has a day job. He is, after all, one of the most sought-out plastic surgeons. “I am leading not one but many lives!” joked the doctor. Further adding, “During the day, I have my task cut out as a cosmetic surgeon- to take some years off the faces of my demanding clients. But there are no emergencies in my type of practice. So, I get into the mode of a writer with scruffy hair once I am back home. Sleeping late may be scoffed at by many, but it helps me have the solitude which lights the bulb of creativity in my head.” Jas Kohli finds his comfort in writing these wonderful stories that help the readers have moments of hilarity, for them to relax on stressful days.

Writing a fiction book is a labour of love, and one can never do it if one starts thinking about it solely in terms of monetary returns. Since Dr Jas Kohli was writing outside of his clinic timings, it did take him about two and a half years to complete the manuscript. “It isn’t that easy to write humour; in fact, it is a serious business- sometimes it takes an hour to create a one-liner.  So, in actual life, a humour writer isn’t smiling or cracking jokes all the time,” explained Dr Jas on the few difficulties he had to face while writing this book.

Fans of the comedy genre can heave a sigh of relief as Dr Jas doesn’t plan on going anywhere, as he immensely enjoys writing books that make people laugh. “Since there has been a good response to my previous books, my next book is also in the humour genre. It is a story about how human relationships are evolving with changing times,” revealed the plastic surgeon-cum-author. In future, he plans to explore writing non-fiction about the subjects he holds close to his heart, such as nature watching, environment etc. Stay tuned for further interesting releases from this brilliant author.

His latest book, ‘Lights! Wedding! Ludhiana!’ can be purchased online at: https://amzn.to/3pm2HiI