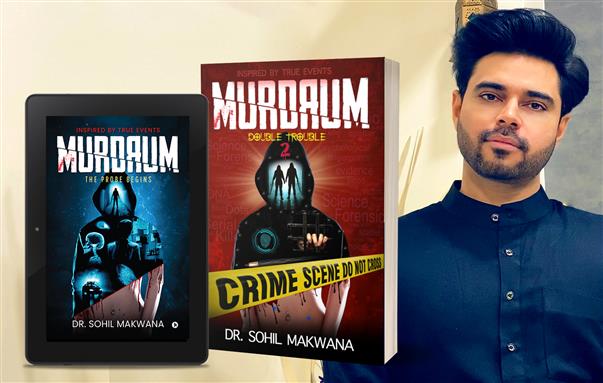 Why did the author pick the title ‘MURDRUM’? If you’re crime fiction obsessed, it’s probably the first question that’s popped into your head in the context of murder mysteries you are devouring, and undoubtedly, it’s worth having a roller-coaster ride of these page-turners to get that answer.

Inspired by real-life prolific serial killers with the highest known victim counts like Harold Shipman, Samuel Little, Ted Bundy, Jeffrey Dahmer — the novels Murdrum: The Probe Begins, and Murdrum 2: Double Trouble dabble in myriad genres and deliver an outstanding, addictive mystery with the mind-boggling twists in the background of high-tech real-life forensic investigations, bizarre medical facts, eccentric true events, and criminal psychology. It’s a journey of a CBI intern Komal who is assigned a task, to sum up, a number of cold murder cases. The smart forensic expert Komal goes against the corrupt system and digs a rort of the heinous serial killer who has been killing silently for the last two decades. The author was caught in the middle of his trek of the Himalayas to talk about the medical fiction Murdrum and his journey of screenwriting, fashion photography, fitness, film making, and authorship, over the phone. Excerpts…

1.           Tell us something about your childhood. Why did you pursue your career in medicine?

I was born on 19 January 1983 to a very ordinary family. My father was a tailor and we had no television at our place. I used to visit my neighbour’s place to watch television, and since then, I was allured to story-telling and filmmaking. I was good at my studies. Having no option left other than studies, I scored good marks on my board examinations and entered medicine, though I was always fascinated by films.

2. Tell us about your college days.

3. Besides being a murder mystery or whodunnit, what else can the readers expect from the book series Murdrum?

It’s an adrenalin rush high-tech forensic crime thriller. Besides, it deals with contemporary social science and the crucial social and social psychological aspects of crime including personal attitudes as well as the broader societal context. It has a hidden message about how resources of society are responsible for creating criminals and what makes a monster out of a man.

4. How did your journey as a writer start?

After completing my MD, I started photography, and in the short span of two years, I became a fashion photographer who had been featured twice in Femina. After learning photography, I thought to give it a try in film direction, but I didn’t want to leave my profession of medicine. Therefore, as an intermediate step of filmmaking, I thought to give a try to writing, and boom! I enjoyed screenwriting, and in just three years, I had penned down scripts of almost twelve films. Later, I penned down Murdrum as I knew the real-life serial killer genre and plot was extremely intriguing and it was unbeatable.

5. What are your future goals?

Film Direction is the next step. I have worked as an assistant director in the Marathi film Bali. It’s available on amazon prime.