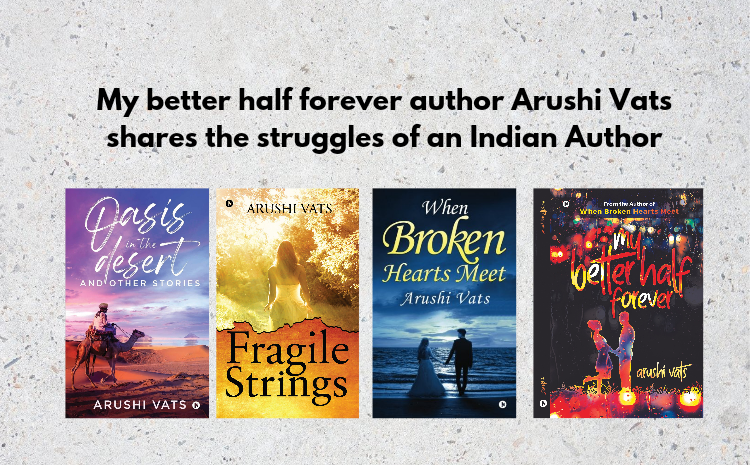 Arushi Vats started her writing career with her debut book Fragile Strings. Later, she published her second book, a romance novel. After writing two books, she received her Masters Degree in Creative Writing in English from Brunel University London. Arushi is a published author of four books.

What Arushi believes about Struggles of an Indian Author?

One of the major struggles that I had to endure was the acceptance by my family members of continuing the path of author career. Initially, it was challenging to make them believe that this was the right course for me. The reason behind this is because most members in my family come from a technical background.

Another struggle in my life as an author is the shortage of time. My parents kept complaining that I was so much occupied with writing the book and not spending enough quality time with them. It has been difficult to juggle both simultaneously. However, I am grateful that they understand this and are very supportive towards my career.

My better half forever

Ever since she had a panic attack, Malvika has never been the same old, jolly girl, but distraught in life. Her life once revolved around her brother who later became a memory of the past. With a dysfunctional family and grieving the loss of her brother, Malvika decides to begin a new chapter in life by stepping into the gates of college, not knowing what fate awaits her.

One glance at Rahul on the first day and she feels something mysterious. The smart and confident Rahul looks at her and it appears to him like they are soulmates, waiting to have their lives entangled in unconditional love.

Oasis in the Desert and other stories

The search for meaning and the importance of our life is one constant thought that always crosses everyone’s mind. It is not meaning that the individual searches for in their life, but at the ground level, what the person is seeking is hope, life-lessons, the truth and a dash of motivation every now and then. All this search makes one feel a sense of fulfilment in their life. Learning is a part of life and man’s quest for life-lessons will never cease until death. Presenting you a collection of short stories, which is an attempt to make you see life and its subtle messages through a different lens.

Avanti meets Suhaas. They become friends. Avanti is a conflicted girl, shattered in the tussle between her past and present and Suhaas is the typical prince charming who has two sides, one which he keeps to himself and the other which he shows to everyone. As their story proceeds ahead, both of them begin to feel affinity for each other. But deep in the realms of their hearts dwells chaos that occurs because of their past relationships. Avanti and Suhaas’s friends make efforts to unite them as they know that they love each other. Eventually, it’s up to Suhaas if he will confess his love or not but the important question arises here is, will Avanti find the courage to leave behind her tumultuous past and embrace her love story?

Fragile Strings is a collection of poems based on a relationship between two individuals that’s fragile and with the passing of time the bond weakens and the connection seems to be disappearing. It’s about the emotional turbulence a person suffers when the love is not reciprocated back like before. The life of a girl who evolves while battling her own feelings and overcoming sadness, heartaches and dejection and how she finally accepts her life in the present and learns to love herself again as she is in the healing process.