Niharika Times bringing unique stories that matter to you 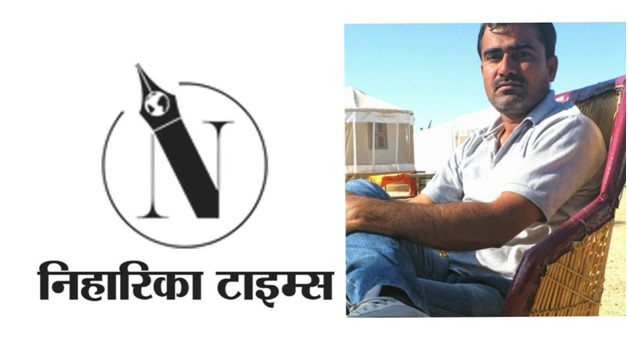 Started by Sabal Singh Bhati, Niharika Times is one of the most read Hindi newspapers in the Jodhpur Division of Rajasthan. It is also the first evening leading daily in the division. The newspaper has been successful in bringing out news worth reading and has created a niche in the print and digital media segment. The Hindi daily was started in the year 2020 from Barmer Headquarters and now has a dedicated Hindi News Portal too.

The daily newspaper is experiencing a significant drop in the circulation of major newspapers across India. It was started with the aim to provide the largely Hindi reading audience of Jodhpur with interesting and unique stories that matter to them. Also, one of the major reasons to start Niharika Times was to fill the immediate need for the Hindi Language daily ‘Sandhya Newspaper.’ ‘Niharika’ which means ‘Nebula’ is translated into Galaxy. Sabal Singh Bhati who is a well-known name among journalists and media persons is the man who worked tirelessly in bringing out stories that resonate with common people. Apart from being a senior journalist with vast experience, he is also the State Secretary of the International Federation of Journalists Organization.

A long career has given Sabal Singh a lot of experience in covering various beats. He had the privilege to work with some of the leading media names throughout his career. He had earlier worked with Rajasthan Patrika and Dainik Navjyoti, both big names in the print media. The virtuoso started his career as a trainee journalist for Rajasthan Patrika in Pali. After working as a journalist for a long time, Bhati, following his dream of starting his own publication house, started Niharika Times. He is someone who understands the power and emergence of digital media and hence he launched the online Hindi Portal in April 2020. The e-portal covers a wide range of segments from politics, lifestyle, sports, entertainment, job, and education.

Niharika Times, to its credit, has a lot of recognition for its brilliant reportage. From scams to murder mysteries, they have uncovered a lot of stories. It was because of their brilliant coverage that the Kamlesh Prajapati fake encounter case by Rajasthan Police on April 22, 2021, was unearthed. The constant coverage built pressure on the Rajasthan government forcing them to recommend a CBI investigation in the matter on 31st May 2021. Through their unique story and storytelling, they have become a preferred choice for a lot of newspaper readers in the Jodhpur division.

They not only cover news on politics but also focus on stories that generally the National media chose to overlook. Apart from covering regional stories on crime, murder, politics, and policy, they also focus on National News which is of the public interest. The group has a dedicated web news portal through which readers can easily get access to their E-papers on a daily basis. The News Portal also focuses on lifestyle and other stories. Niharika Times which started as a small regional Hindi newspaper is now expanding its base and is continuously focusing on bringing out stories that matter to the Nation. Sabal Singh Bhati is working hard to make it one of the leading national dailies of India.