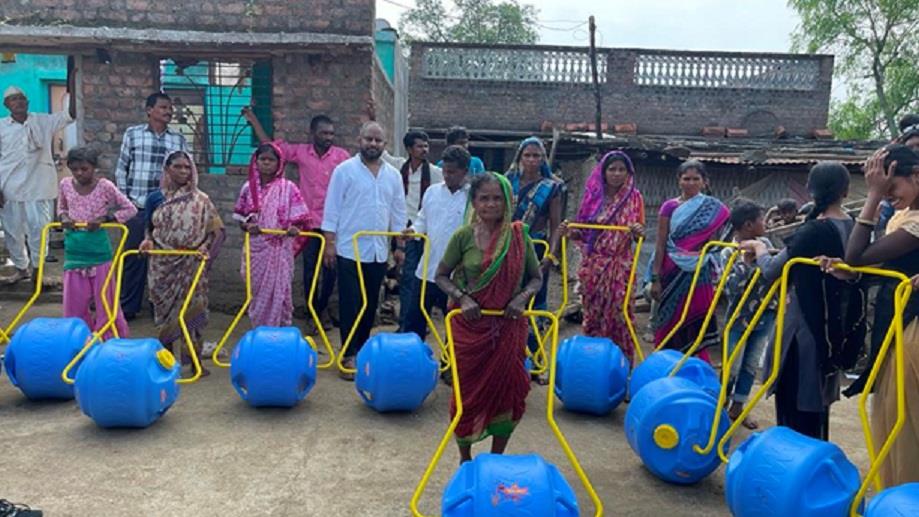 With the welfare of his people branded on his soul, the youth leader Tejasvi Surya’s milestone birthday celebration was driven by his humility and love for people. After witnessing the grave issue of water scarcity taking over the lives of women in remote, tribal populated areas of Varpod Village Yavatmal District, Maharashtra, and Naxalite prone areas of Gadchiroli( Maharashtra- Chhattisgarh border), Eturunagaram & Utnoor (Telangana), PM Sai Prasad, Bhartiya Janta Yuva Morcha(BJYM) National Treasurer, decided to convert the birthday celebration of the youth leader into a catalyst for a good cause. With the desire of gifting happiness, Prasad decided to present the drought-hit population with a handy solution- Water Wheel. A water wheel is a simple solution that can make the lives of women in rural India much easier. Women in rural India are often forced to walk miles to fetch scanty amounts of water. Earlier, women would travel 4-5 km back and forth every day, roughly taking 5-6 hours of their lives just to get 2 mud pots of water. This laborious process was not only time-taking but also physically exhausting. Gifting happiness to these women, Prasad donated 250 families with a water wheel on Surya’s birthday, commemorating his desire to elevate his people. A water wheel is a large circular water drum that can be rolled on the ground with the help of fitted handles. It is extremely convenient to transport from place to place and can carry up to 45 liters of water at a time.

Water scarcity has been a grave issue that has disrupted many lives in rural India. For decades droughts have affected the lives of thousands of villages. As groundwater resources are dangling on the last straw of sustaining due to unsustainable consumption, ponds and tanks have been drying up, thus driving women to travel farther distances just to fetch water for survival. Over-reliance and exploitation of natural water resources have been the top reason for such tragic scarcity.

Various organizations have been working extensively towards improving water accessibility for drought-hit rural India but they meet with several roadblocks that cause the process to slow down. Surprisingly, one of the reasons is the dominance of Naxalites and their reluctance to any progressive initiatives for the betterment of the society that come under their “command.” Various incidents of brutal murders of government officials gone with water accessibility solutions have been reported from Naxalite-prone areas.

There is still a very long way to go while tackling this dangerous depletion of groundwater resources but small initiatives like presenting water wheels to women of rural India can drastically influence the change. Like the famous proverb says “Little drops of water make the mighty ocean,” little initiatives can make a big difference.

Tejasvi Surya has been an influential youth leader positively impacting several lives on the go. He is BJP’s youngest member of parliament in Lok Sabha elected from the constituency of Bengaluru South and has been inspiring youths of the nation with his idealism and pragmatism to India’s progress. PM Sai Prasad believes that celebrating Surya’s birthday with the welfare of his people in mind will constructively influence the youth to take initiatives on their personal level and ignite the flame of change in the country.