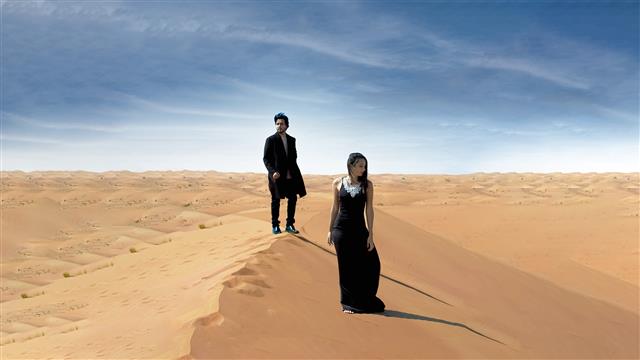 "Hanjua" marked as Sandesh Motwani's debut single released in January 2021, and it’s unlike anything the mashup-cover popular singer released before. His vocals are rawer, the lyrics are more honest and most importantly, the song pushes his sound to an even more credible and international production style.

Heartbreak and pain are always the perfect companions for a hard-hitting, honest pop track. Those emotions easily pave a way for the songwriting to resonate with listeners and find a spot on the radio airwaves.

The single features the right amount of repetition, a catchy hook and delivery that should make the ears perk up. The track starts with vocals before subtly providing a backdrop to Sandesh’s massive production.

This rhythm remains underneath his impressive voice throughout until the build-up to the chorus, and then the song just goes into a beautiful dream with the Sarangi fusion.

The radio-ready production pairs well with the subtle vocal performance from Sandesh. It allows the artist as well as the listeners to reflect on what was good, and how it all went wrong. But the strongest aspect just might be the heartfelt, love-torn lyrical content.

"Kaisi Yeh Dooriyan, Hoke Bhi Mera Na Tu Ho Saka," Sandesh bitterly sings before the chorus comes through. While the somber break-up track is an easy listen, some aspects come off as heart touching and emotionally powerful. The vocal delivery from Sandesh Motwani and the songwriting are solid throughout.

"Hanjua" is a bittersweet effort, the sentiment is intact, and even the artistic chemistry is as strong as it could be.

After shaking off the dust of a break up, the song’s intention morphs into a motive for revenge, rather than understanding. There is more maturity and sophistication presented on "Hanjua" than what was showcased on Sandesh's earlier, folk-leaning mashups and covers.  Sandesh may have initially been reminiscing on the fond memories with someone who broke his heart, but his intention of moving forward and erasing the thought of a boasting individual are made clear. The groovy beat and the noticeable charm are simply bonuses in the long run.

The beautifully shot music video by Vishesh Motwani, makes you transcend to a dream-like world in a breathtaking experience. “It’s massively popular. It’s brilliant to have a song do so well in so many formats simultaneously, “If you look at what we call total audience spins or total impressions, ‘Hanjua’ has 3 million total audience spins. That’s massive,” he said.

On a technical level, we can look at its chord progressions and melody and identify a few reasons why the song is so beloved. Audiences seem to be craving something that’s different from what they’ve been hearing, yet still familiar, and “Hanjua” offers that.

All in all "Hanjua" is a proper, acoustically-driven, tropical beat-influenced single that comes off relaxed but hard hitting as if both knew the love would eventually run out. It is the type of suave R&B/pop experiment that is going to be a highlight of Sandesh Motwani's career.